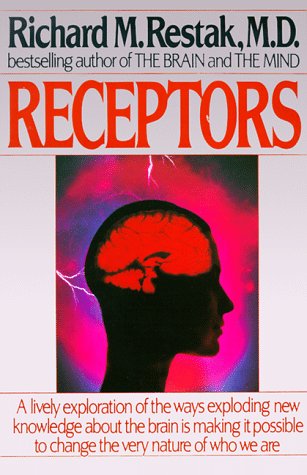 What if there were a pill that could change you from an introvert to the exuberant extrovert you always wanted to be?  A capsule to make you more assertive, creative, or intelligent?  What is you could "design" your own brain?  Who would you be? Only a few years ago such possibilities seemed the stuff of science fiction, but in today's laboratory remarkable new advances in brain research are making such transformations a reality.  In Receptors,  famed neuropsychiatrist Richard Restek leads us on an exhilarating--and sometimes disquieting--scientific adventure into this bold new frontier. He shows us how break-through discoveries are enabling neuroscientists to decode the mysteries of the human brain, holding out the exciting possibility of relieving, and ultimately even curing, conditions such as memory loss, depression, schizophrenia, Parkinson's, and even Alzheimer's disease.  He documents the likelihood that in the very near future, it will be possible to alter our own brains, to choose the personality we want.  How we cope with such godlike power is one of the fascinating questions he poses in this challenging and thought-provoking book. From the levitating ointments of medieval "witches" to the magic mushrooms of southern Mexico, from the LSD of the psychedelic age to the latest discoveries of today's psychopharmacologists, Dr. Restak provides a vivid and lucid account of humanity's unceasing effort to understand and harness the powers of the mind--and the possibility that solutions to some of the brain's deepest mysteries may be close at hand.

The bland title to psychiatrist/neurologist Restak's latest (The Brain Has a Mind of Its Own, 1991, etc.) refers to the fascinating subject of drugs and the brain. In the last few decades, investigators have discovered an increasing number of chemicals that grease the brain's circuits: the neurotransmitters that cross the synapse between nerve cells and bind to receptors on the neighboring nerve cell membrane. The receptors themselves have been elusive, but they, too, are yielding to modern technology. All thought, emotion, and behavior are thought to stem from the complex interactions of transmitters with receptors: complex because a transmitter may bind to more than one receptor and nerve cells may secrete several receptors--phenomena that go far to explain the fine shading of human behavior. Here, Restak begins with the hallucinogens and the work of the German investigator Louis Lewin, who collected peyote buttons in Mexico and isolated mescaline. In the 1940's came the discovery of LSD 25 by Albert Hoffman, in Switzerland, who later isolated psilocybin, the magic mushroom's ingredient. There were hints that the drugs were related to naturally occurring brain chemicals, but how they worked was unclear (and still is). Much serendipity attended the early research: The use of lithium to treat manic- depression might never have come about had it not been for an Australian psychiatrist's use of lithium to dissolve uric acid from manic-depressive patients in order to inject it into guinea pigs. Today's roster of psychoactive drugs include the strong tranquilizers, the antidepressants, stimulants, and opiates- -effective because they bind to specific receptors as ``agonists,'' or block the binding of the natural chemical as ``antagonists.'' Restak is very good on origins and etymologies--and highly speculative about the future. Someday, he foresees, we may be able to sculpt the precise structure for fine-tuning cures of mental illness and even effect permanent changes to ``improve'' personality. Someday in the Brave New World? More tolerable is Restak's earlier conclusion that ``the drugs developed within any society reflect and amplify the ideals and goals of that society.'' -- Copyright ©1994, Kirkus Associates, LP. All rights reserved.

Although his informative book deals primarily with the receptors for neurotransmitters in the brain, Restak frequently makes the point that the brain functions and must be thought of as a whole. He lays clear groundwork for his technical subject with a discussion of the three levels of the brain and its fundamental physiology. Basic to his approach is the chemical relationship between many hallucinogenic plants and the neurotransmitters in the brain, and he makes his points lucidly, often through using helpful analogies. What with their work on the classification of narcotic and stimulating drugs, LSD, and lithium, such scientists as Louis Lewin, John Cade, and Albert Hofmann already appear as curious and imaginative human beings, but Restak shows how their specialty has been crucial to the study of neurotransmitters, as has been research (to which Restak devotes considerable space) into the two "most addictive" drugs--cocaine and amphetamines--for what it has shown investigators about the workings of the brain. Looking into the future, Restak sees more work along the lines that led to the characterization and localization of the receptor for marijuana. William Beatty