Items related to Bound in Moonlight 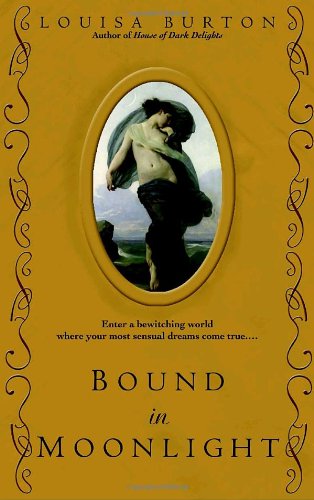 In this provocative follow-up to her sensational debut, House of Dark Delights, Louisa Burton issues another invitation to the notorious Castle of the Hidden Grotto?a place of entrancement, temptation, and searing eroticism.

A sheltered heiress is appalled by the licentiousness she encounters at Chateau de la Grotte Cachée, until a beguiling stranger frees her from her gilded cage by tutoring her in the arts of love.... A rector?s daughter, in despair over being ruined and impoverished, allows herself to be sold at a slave auction for one week of sexual servitude to an aristocratic master with unorthodox tastes.... A woman with ancient ties to the castle is forced to confront her destiny?and a passion as consuming as it is forbidden.?

Irresistible and deliciously dangerous, Bound in Moonlight propels you into a world of intoxicating sensuality you?ll want to return to again and again.


Never in her twenty-four pampered and cosseted years among New York City’s privileged Upper Ten had Emmeline witnessed acts of such appalling lechery, nor supposed that people of her own class might stoop to indulging in them.

She was determined to find Lord Hardwyck and be quit at once of this shameless château. Surely her distinguished and urbane fiancé had not suspected the nature of this bacchanalian house party when he accepted the invitation.

Such were her thoughts as she opened the door to which she had been directed by the countess in the leather mask. Emmeline was further comforted upon entering the room within and discovering it to be lined floor to ceiling and wall to wall with bookshelves. No doubt his lordship had spent the weekend ensconced in a secluded corner with his nose in some dusty old tome.

Imagine, dear Reader, our heroine’s dismay when her gaze lit upon Archibald Dickings, Baron of Hardwyck and heir apparent to the earldom of Upswinge, atop a polished mahogany writing table with his nose, along with the rest of his face, planted snugly between the thighs of one voluptuous blonde and his turgid shaft between those of another.

“I’m coming!” cried the latter as she strained against the silken cords that bound her hands and feet to the four legs of the table. “Oh, yes! God, yes! Oh! Oh!”

Upon hearing Emmeline’s gasp of horror, Lord Hardwyck looked up and blinked at her. “Miss Woodbridge. Fancy encountering you here. I didn’t even know you were in France.”

From Chapter One of Emmeline’s Emancipation by Anonymous, first published in 1903 by Saturnalia Press and reprinted since then in innumerable editions worldwide. A rare first edition from the original eight-hundred-copy print run sold in 2003 for $158,000 at Sotheby’s in New York.

No, no, a thousand times no, I will not marry you. I will, however, ride you like a cowgirl as soon as I see you again. I mean, the moment I lay eyes on you, so I suggest you don’t meet my ship when it arrives, unless you want us both to be arrested for public indecency. Or don’t they care about that sort of thing in France? Probably not. God, I love the French. You most of all, naturellement.

You can’t imagine what it means to me in my present wretched situation, hearing from you (most especially when you relate one of your deliciously filthy little fantasies, like the one about you making a stag film starring moi). I reread your letters with pathetic regularity, like some moony sixteen-year-old. Thank God for Air Mail. Every morning I sit in my wheelchair in front of this enormous picture window in the front room of the inn, my poor smashed leg in its plaster cast propped up on the window seat, waiting for the mail. It arrives via the strapping, ruddy-cheeked young Nils, who delivers it on skis after picking it up in town, except of course when the weather won’t permit the mail plane to land.

Nils, who hails from Norway, is a silver-blond giant. I tend to gape at him, because you just don’t see men that tall in France. You tower over most of your countrymen, and you’re at least an inch or two shy of six feet. I read somewhere that the reason most Frenchmen are on the short side is that Napoleon turned all the tall ones into soldiers when he was trying to take over the world, and of course most of them didn’t live to reproduce. Weren’t there something like twenty-five thousand French casualties at Waterloo alone?

This is the kind of thing I start ruminating on ad nauseam while I sit here staring out at the snow and wishing I were back in Paris with you. I know I can’t stop whining about how bored I am, but you can’t imagine what it’s like, watching all the other guests tromp gaily away every morning with their skis over their shoulders while I languish here with my shattered leg, cracked arm, and abandoned dignity. At least it was the left arm I broke, so I can still hold a pen. I’ve been polishing (actually over-polishing) the article about the Steamboat Springs Winter Festival that Hearst sent me here to write. And composing epic letters to you, of course.

I shouldn’t complain so much about being bored. Kitty is wonderful company, as always, and at least I’m not being held hostage in that ghastly hospital anymore. Dr. Horney (God, what a miserable boyhood he must have suffered) will not change his tune no matter how much I plead and cajole. He insists I must wait until both casts are off before I can travel. Kitty says she won’t go with me if I try to leave before he saws off all this plaster, and I couldn’t possibly travel solo in this condition, so it looks as if I’m stuck here for at least another four weeks.

Your last letter was a delight, mon amour, except for that rather tedious harangue about me being a reckless thrillseeker who got what she asked for. You know damn well that I can handle myself on a pair of skis, or you should, after Montgenčvre. You told me I was the most accomplished female skier you’d ever seen—or is that the kind of applesauce you sell to every fresh new skirt you meet? In any event, you know I’ve been keen to try my hand at ski jumping. Pretty much the only reason I took this assignment was so that I could learn to jump from Carl Howelsen himself—and, of course, to watch the best jumpers in the world compete against one another. For your information, I completed over a dozen successful jumps before that nasty landing, which only happened because I was exhausted.

On a serious note, about your campaign to make me Mme. Rčmy Binet:

Touched as I am by your heartwarming observation that I “look and fuck” like a woman ten years my junior (ah, you romantic frogs), a subtraction of a decade would put me at thirty-four, which is, need I remind you, STILL TWO YEARS OLDER THAN YOU. But that’s not the only reason I won’t marry you. We’ve only known each other for a year, and although I can’t argue with you about our “extraordinary rapport” and “the deep communion of our souls,” there is still much you don’t know about me, such as the reason I’m so sour on the institution of marriage.

Suffice it to say that Emmeline’s Emancipation is something of a roman ŕ clef. Which is to say, the events I described in that book actually happened, more or less. I changed the names of everyone involved, of course, and altered some details to make it more entertaining and more difficult to identify me as the author. The most major change was the setting. It didn’t take place in Scotland. It was a castle in France called Château de la Grotte Cachée.

I did, however, show up to find my betrothed giving it to two women, although it was in the dining room, not the library. The women weren’t both blond, though, just the one he was banging (who really was tied to the table, but with ordinary hemp rope, not silken cords). He was holding himself over her with his arms braced, eating out a dark-haired woman in a black corset, black opera gloves, and tall boots, who was kneeling in front of him. She had a riding crop, and she was whacking him on the ass, really putting her arm into it, barking instructions as to how he should fuck the blonde. “Pound her! Ram it in! Harder, you miserable weakling. Put your back into it! Squeeze that ass! Squeeze it!” In the book, both women are tasty young tomatoes, but in real life, although the dark-haired one was pretty, the blonde was a little more . . . real. She sported quite the chunky chassis even by the standard of the times, and I remember she had a really ugly bruise on her thigh.

The faithless fiancé was Randolph Lytton, Baron of Hickley and now the eighth Earl of Kilbury, his old man having turned up his toes between then and now. I must admit, he wasn’t quite as unruffled when I walked in on him as was his fictional counterpart, Archie, but neither did he seem particularly distressed. He honestly did seem more perplexed than anything else.

The rest played out much as it does in the book, and yes, there really was a charming young satyr with a rolling pin between his legs who took me in hand, as it were, but his name wasn’t Tobias. It was Inigo. And when I say he was a satyr, I don’t mean he was a lothario. I mean he very well may have been a satyr.

I can’t believe I just committed those words to paper.