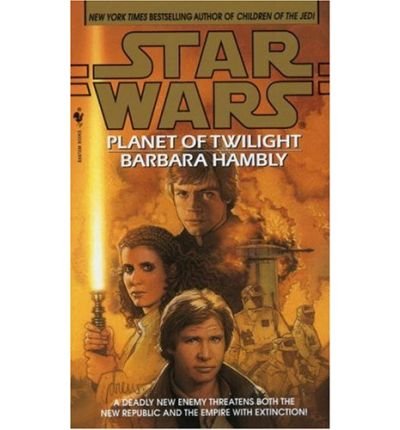 Princess Leia has been taken captive by a ruthless and charismatic warlord bent on destroying the New Republic. But then a strange life-form, unlike any the galaxy has ever seen, awakens - a life form so malevolent it will destroy everything - both Empire and New Republic, on its way to domination.

Prepare yourself for a nonstop Leia-fest. The New Republic's new leader is back in bondage again, but at least this time she doesn't have Jabba the Hut slobbering all over her. Kidnapped after a clandestine mission to the former prison-planet Nam Chorios goes awry, Leia relies on her wits, her ever-developing Jedi powers (including some mean saber-swinging), and her pals to escape, survive, and resolve the conflict on the desolate planet. Han, Chewie, and Lando may get short shrift in Planet of Twilight, but Luke gets in some good scenes on the trail of Force-sensitive babe Callista, and the droids provide more than their share of laughs. While veteran writer Hambly doesn't subscribe to the admittedly entertaining shut-up-and-start-blasting school of Star Wars writing, her skilled characterizations and more literary stylings are a welcome addition to the fold. --Paul Hughes

The Star Wars® saga continues in hardcover. Renat Chorios is abackwater land that serves as a sanctuary for a peaceful religious cult. Butpeace is threatened with the rise of a sinister warlord who takes Princess Leiahostage by tricking her into attending a diplomatic meeting. Meanwhile Lukecontinues his search for his lost love, and finds that the force has someuncontrollable and deadly powers in this strange land. At the center of theturmoil lies a once-dormant life form capable of destroying the entiregalaxy.

, (TM) and 1997 Lucasfilm Ltd. All rights reserved. Used under authorization.