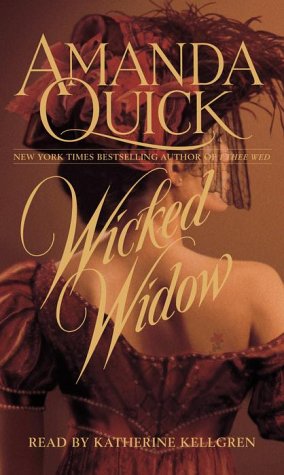 She's known as the Wicked Widow, for rumors abound that she had dispatched her husband to the next world.  But Madeline Deveridge has a more vexing problem than her scandalous reputation.  Her husband's ghost is haunting her!  She must exorcise him, and turns to Artemis Hunt for aid.  Owner of the Dreams Pavilions, London's favorite pleasure gardens, Artemis is no stranger to the exotic and the mysterious.  So he agrees to join Madeline in her unusual enterprise, never expecting to find himself in the thrall of true passion.  But the ghost is a real menace...and intent on using Madeline for a deadly purpose.

Award-winning author Amanda Quick weaves a tale of a man and a woman who understand just what it means to be haunted. Artemis Hunt, the mysterious master of a secret society, has been obsessed by the knowledge that he was unable to protect his mistress from a brutal death, and has spent the last five years plotting her revenge. Madeline Reed Deveridge, known as the infamous Wicked Widow by polite society, is rumored to have murdered her husband. But now Madeline is afraid that her dead spouse has returned from beyond the grave to terrorize her. In fear for her life and that of her beloved aunt, Madeline blackmails Artemis into aiding her by threatening to expose his ownership of the Dream Pavilions, London's premier pleasure garden--an association, if revealed, that would destroy his reputation and put his long-held plans of vengeance at serious risk. The two are drawn together at first by necessity, but Artemis soon finds himself intrigued then intoxicated by the confident woman known as the Wicked Widow. Madeline, who is inclined to distrust men after her disastrous marriage, falls prey to the unfamiliar feelings Artemis inspires in her. Their burgeoning passion may save them each from an empty future--if their secrets don't kill them first. Another Quick masterpiece! --Alison Trinkle

"If you start an Amanda Quick book in the late afternoon, you'll probably spend the night with it."
-- The Denver Post

Amanda quick is...
"One of the hottest and most prolific writers in romance today... Her heroines are always spunky women you'd love to know, and her heroes are dashing guys you'd love to love."
Coming soon in hardcover
Amanda Quick Slightly Shady
Wherever Bantam books are sold

Book Description Random House Audio, 2000. AUDIO CASSETTE. Condition: Good. 2 AUDIO CASSETTE EDITION. We will test each cassette prior to shipping for reliable sound. You will receive a worthwhile set. Enjoy this AUDIO CASSETTE PERFORMANCE for your home and library. Audio Book. Seller Inventory # 010720201407196