Items related to The Sara Paretsky Value Collection: Indemnity Only,... 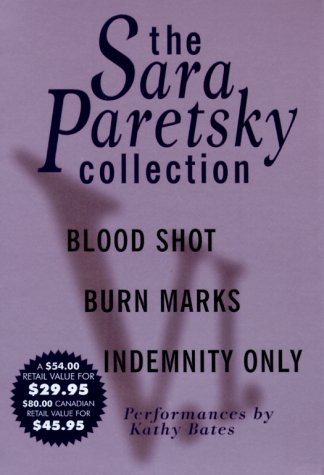 INDEMNITY ONLY
Meeting an anonymous client late on a sizzling summer night is asking for trouble. But trouble is Chicago private eye V.I. Warshawski's specialty. Her client says he's the prominent banker, John Thayer. Turns out he's not. He says his son's girlfriend, Anita Hill, is missing. Turns out that's not her real name. V.I.'s search turns up someone soon enough -- the real John Thayer's son, and he's dead. Who's V.I.'s client? Why has she been set up and sent out on a wild-goose chase? By the time she's got it figured, things are hotter -- and deadlier -- than Chicago in July. V.I.'s in a desperate race against time. At stake: a young woman's life.

BURN MARKS
Someone knocking on the door at 3 A.M. is never good news. For V.I. Warshawski, the bad news arrives in the form of her wacky, unwelcome Aunt Elena. The fire that has just burned down a sleazy SRO hotel has brought Elena to V.I.'s doorstep. Uncovering an arsonist -- and the secrets hidden behind Elena's boozy smile - will send V.I. into the seedy world of Chicago's homeless... into the Windy City's backroom deals and bedroom politics, where new schemers and old cronies team up to get V.I. off the case -- by hook, by crook, or by homicide.

BLOOD SHOT
This time, V.I.'s girlhood pal Caroline needs her services.  Caroline wants V.I. to uncover the identity of her father--which Caroline's dying mother angrily refuses to divulge.  For V.I., it's a routine missing-persons search that means going back to her old stomping grounds, where she's not so hot to trot.  But Caroline calls it quits when her friend, the head of a local recycling projec, is found dead in the polluted waters of a local pond.  The trouble is, V.I. won't quit--because the search for Caroline's father has lead her into a toxic mix of corporate chicanery and chemical corruption.  Add a dire family secret, and you've got a brew that could prove poisonous--especially to a certain private eye who knows too much.

SARA PARETSKY is the author of eleven novels including the bestselling Tunnel Vision, Guardian Angel, and Burn Marks.  She lives in Chicago with her husband.