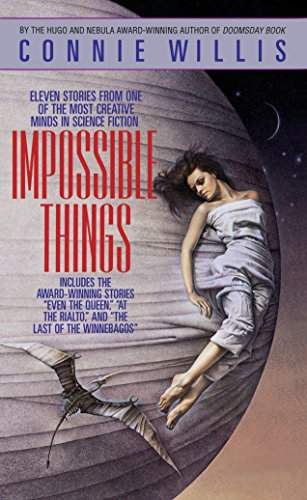 Winner of six Nebula and two Hugo awards for her fiction, Connie Willis is acclaimed for her gifted imagination and bold invention. Here are eleven of her finest stories, surprising tales in which the impossible becomes real, the real becomes impossible, and strangeness lurks at every turn.

The end of the world comes not with a bang but a series of whimpers over many years in "The Last of the Winnebagos."

The terror of pain and dying gives birth to a startling truth about the nature of the stars, a principle known as the "Schwarzschild Radius."

In "Spice Pogrom," an outrageous colony in outer space becomes the setting for a screwball comedy of bizarre complications, mistaken identities, far-too-friendly aliens--and even true love.

Connie Willis is a member of the Science Fiction Hall of Fame and a Grand Master of the Science Fiction and Fantasy Writers of America. She has received seven Nebula awards and eleven Hugo awards for her fiction; Blackout and All Clear—a novel in two parts—and Doomsday Book won both. Her other works include Crosstalk, Passage, Lincoln’s Dreams, Bellwether, Impossible Things, Remake, Uncharted Territory, To Say Nothing of the Dog, Fire Watch, and Miracle and Other Christmas Stories. Connie Willis lives with her family in Colorado.

THE LAST OF THE WINNEBAGOS

On the way out to Tempe I saw a dead jackal in the road. I was in the far left lane of Van Buren, ten lanes away from it, and its long legs were facing away from me, the squarish muzzle flat against the pavement so it looked narrower than it really was, and for a minute I thought it was a dog.

I had not seen an animal in the road like that for fifteen years. They can’t get onto the divideds, of course, and most of the multiways are fenced. And people are more careful of their animals.

The jackal was probably somebody’s pet. This part of Phoenix was mostly residential, and after all this time, people still think they can turn the nasty, carrion-loving creatures into pets. Which was no reason to have hit it and, worse, left it there. It’s a felony to strike an animal and another one to not report it, but whoever had hit it was long gone.

I pulled the Hitori over onto the center shoulder and sat there awhile, staring at the empty multiway. I wondered who had hit it and whether they had stopped to see if it was dead.

Katie had stopped. She had hit the brakes so hard, she sent the car into a skid that brought it up against the ditch, and jumped out of the Jeep. I was still running toward him, floundering in the snow. We made it to him almost at the same time. I knelt beside him, the camera dangling from my neck, its broken case hanging half-open.

I looked in the rearview mirror. I couldn’t even see over the pile of camera equipment in the backseat with the eisenstadt balanced on top. I got out. I had come nearly a mile, and looking back, I couldn’t see the jackal, though I knew now that’s what it was.

“McCombe! David! Are you there yet?” Ramirez’s voice said from inside the car.

I leaned in. “No,” I shouted in the general direction of the phone’s mike. “I’m still on the multiway.”

“Mother of God, what’s taking you so long? The governor’s conference is at twelve, and I want you to go out to Scottsdale and do a layout on the closing of Taliessin West. The appointment’s for ten. Listen, McCombe, I got the poop on the Amblers for you. They bill themselves as ‘One Hundred Percent Authentic,’ but they’re not. Their RV isn’t really a Winnebago, it’s an Open Road. It is the last RV on the road, though, according to Highway Patrol. A man named Eldridge was touring with one, also not a Winnebago, a Shasta, until March, but he lost his license in Oklahoma for using a tanker lane, so this is it. Recreation vehicles are banned in all but four states. Texas has legislation in committee, and Utah has a full-divided bill coming up next month. Arizona will be next, so take lots of pictures, Davey boy. This may be your last chance. And get some of the zoo.”

“What about the Amblers?” I said.

“Their name is Ambler, believe it or not. I ran a lifeline on them. He was a welder. She was a bank teller. No kids. They’ve been doing this since eighty-nine when he retired. Nineteen years. David, are you using the eisenstadt?”

We had been through this the last three times I’d been on a shoot. “I’m not there yet,” I said.

“Well, I want you to use it at the governor’s conference. Set it on his desk if you can.”

I intended to set it on a desk, all right. One of the desks at the back, and let it get some nice shots of the rear ends of reporters as they reached wildly for a little clear airspace to shoot their pictures in, some of them holding their vidcams in their upstretched arms and aiming them in what they hope is the right direction because they can’t see the governor at all, let it get a nice shot of one of the reporter’s arms as he knocked it facedown on the desk.

“This one’s a new model. It’s got a trigger. It’s set for faces, full-lengths, and vehicles.”

So great. I come home with a hundred-frame cartridge full of passersby and tricycles. How the hell did it know when to click the shutter or which one the governor was in a press conference of eight hundred people, full-length or face? It was supposed to have all kinds of fancy light-metrics and computer-composition features, but all it could really do was mindlessly snap whatever passed in front of its idiot lens, just like the highway speed cameras.

It had probably been designed by the same government types who’d put the highway cameras along the road instead of overhead so that all it takes is a little speed to reduce the new side-license plates to a blur, and people go faster than ever. A great camera, the eisenstadt. I could hardly wait to use it.

“Sun-Co’s very interested in the eisenstadt,” Ramirez said. She didn’t say good-bye. She never does. She just stops talking and then starts up again later. I looked back in the direction of the jackal.

The multiway was completely deserted. New cars and singles don’t use the undivided multiways much, even during rush hours. Too many of the little cars have been squashed by tankers. Usually there are at least a few obsoletes and renegade semis taking advantage of the Patrol’s being on the divideds, but there wasn’t anybody at all.

I got back in the car and backed up even with the jackal. I turned off the ignition but didn’t get out. I could see the trickle of blood from its mouth from here. A tanker went roaring past out of nowhere, trying to beat the cameras, straddling the three middle lanes and crushing the jackal’s rear half to a bloody mush. It was a good thing I hadn’t been trying to cross the road. He never would have even seen me.

I started the car and drove to the nearest off-ramp to find a phone. There was one at an old 7-Eleven on McDowell.

“I’m calling to report a dead animal on the road,” I told the woman who answered the Society’s phone.

“It’s a jackal,” I said. “It’s between Thirtieth and Thirty-second on Van Buren. It’s in the far right lane.”

“Did you render emergency assistance?”

“There was no assistance to be rendered. It was dead.”

“Did you move the animal to the side of the road?”

“Why not?” she said, her tone suddenly sharper, more alert.