Items related to I, Asimov: A Memoir

Asimov, Isaac I, Asimov: A Memoir

I, Asimov: A Memoir 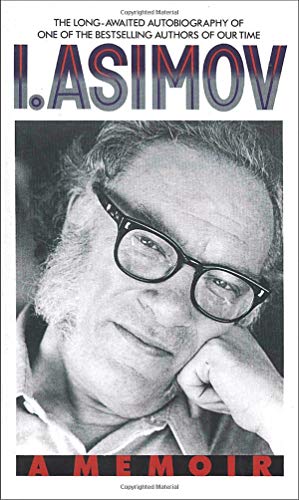 Arguably the greatest science fiction writer who ever lived, Isaac Asimov also possessed one of the most brilliant and original minds of our time. His accessible style and far-reaching interests in subjects ranging from science to humor to history earned him the nickname “the Great Explainer.” I. Asimov is his personal story—vivid, open, and honest—as only Asimov himself could tell it.

Here is the story of the paradoxical genius who wrote of travel to the stars yet refused to fly in airplanes; who imagined alien universes and vast galactic civilizations while staying home to write; who compulsively authored more than 470 books yet still found the time to share his ideas with some of the great minds of our century. Here are his wide-ranging thoughts and sharp-eyed observations on everything from religion to politics, love and divorce, friendship and Hollywood, fame and mortality. Here, too, is a riveting behind-the-scenes look at the varied personalities—Campbell, Ellison, Heinlein, Clarke, del Rey, Silverberg, and others—who along with Asimov helped shape science fiction.

As unique and irrepressible as the man himself, I. Asimov is the candid memoir of an incomparable talent who entertained readers for nearly half a century and whose work will surely endure into the future he so vividly envisioned.

The long-awaited autobiography of the science fiction master. Filled with his opinions and insights on topics ranging from his own genius and his fear of flying to politics, love, mortality, Hollywood, and religion. Non-fiction.

Isaac Asimov began his Foundation series at the age of twenty-one, not realizing that it would one day be considered a cornerstone of science fiction. During his legendary career, Asimov penned more than 470 books on subjects ranging from science to Shakespeare to history, though he was most loved for his award-winning science fiction sagas, which include the Robot, Empire, and Foundation series. Named a Grand Master of Science Fiction by the Science Fiction Writers of America, Asimov entertained and educated readers of all ages for close to five decades. He died, at the age of seventy-two, in April 1992.