Items related to Call the Devil by His Oldest Name

Bissell, Sallie Call the Devil by His Oldest Name

Call the Devil by His Oldest Name 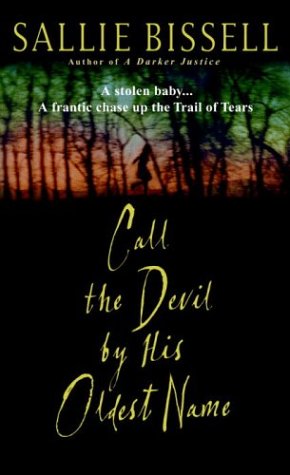 Haunted by the death of her mother and tortured by the secret that died upon her best friend's lips, assistant district attorney Mary Crow is obsessed with finding the man who holds the key to both those tragedies.

When her infant goddaughter is kidnapped, Mary knows the hunt she's been dreading has begun. In a lethal game of cat-and-mouse that will take her along the Cherokee Trail of Tears, Mary must save the child of the man she loves while she rips the secrets from the heart of a killer who could be mistaken for the very devil himself.

Sallie Bissell, fast distinguishing herself as the Patricia Cornwall of the Appalachian Mountains, delivers a tour de force of relentless suspense and heart-stopping menace that Rendezvous raves "will leave you breathless."

Sallie Bissell is a native of Nashville, Tennessee. She currently divides her time between Nashville and Asheville, North Carolina, where she is at work on her fourth novel of suspense.

Tuesday, October 8
"Can you show us the Popsicle Man, honey?" Mary Crow sat cross-legged on her office floor, close beside Jasmine Harris, a five-year-old who had lately reverted to the babyish habits of wetting her pants and sucking her thumb. Although the child was of normal height and weight, her huge brown eyes and woeful face reminded Mary of children she'd seen in advertisements beseeching aid for Zimbabwe or Somalia. Jasmine, however, was American. She came from a poor section of Atlanta known as Bankhead and the chief disaster she and a number of other children in her neighborhood had suffered was a forty-one-year-old white male named Dwayne Pugh, aka the Popsicle Man.

"Come on, Jasmine. Don't you stop talkin' now." Danika Lyles, the young attorney who worked as Mary's assistant, spoke more gruffly to the child. "You be doing just fine till we ask you that question."

Jasmine stuck her thumb in her mouth and stared down at the photos of four white men, spread out on the floor. For a long moment she did nothing but noisily work her jaws, then she began to edge one tiny finger up on the corner of the photograph third from the left.

Mary held her breath. For weeks, Child Protective Services had brought Jasmine here to be interviewed; for weeks, they'd come up against this block. The child was bright, answered their questions willingly--until asked to identify Pugh. Then Jasmine would stare at his photograph transfixed, as if the man's very image rendered her speechless with terror. Now, as they neared the end of Pugh's trial, Mary needed Jasmine to do more than just suck her thumb as she gaped at Pugh's picture. Mary needed Jasmine to tell the jury exactly what Pugh had done.

"Look carefully, Jasmine," Mary said. "Are you sure this is the man who gave you all those Popsicles?"

For a moment Jasmine just sucked louder, then she moved her finger away from the corner of the photo and tapped it on the man's right eye.

"Good, baby." Danika knelt down on the floor. "Now tell us what he did. Tell us how he hurt you."

At first Jasmine stared at the photo, then she began to scream. Not weep. Not cry. But scream, like a small, helpless animal twisting in some predator's claws. The gooseflesh rose on Mary's skin as she reached instinctively for the terrified child, who scrambled into her arms with a death grip of her own.

"It's okay, Jasmine," she murmured, the odor of feces drifting up as the child helplessly filled her diaper. "He's not going to hurt you anymore. I promise. Never, ever again. I promise."

Jasmine shrieked on. Mary began to rock her back and forth, singing an old Cherokee song about why Possum's tail is bare. As Mary sang, Danika quickly scooped up the photographs and dropped them facedown on Mary's desk. By the time Mary had sung the possum song twice, Jasmine had grown quiet.

"Guess what, Jasmine," whispered Mary. "We sang the bad man away. He's not here anymore. You want to turn around and see?"

"Okay. Here we go." Mary carried her over to Alberta Williams, a sweet, bosomy woman who served as Jasmine's caseworker.

"Don't she always." Mrs. Williams rose from her chair with surprising grace, Jasmine clinging to her neck.

"Thank you for coming, Jasmine," said Mary, resting her hand for a moment on the child's soft cheek. "You did a terrfic job."

When the two left the room, Mary moved to her desk and looked at the photograph Jasmine had finally mustered the courage to touch. A flaccid-faced man with thick lips and receding blond hair, Dwayne T. Pugh had originally been ticketed by the Deckard County cops for vending food without a license. When Officer John Clark climbed into the back of Pugh's ice cream truck and found six tiny pairs of Winnie-the-Poo underpants stuffed among the Eskimo Pies, he grew suspicious. They took Pugh in for questioning and got a warrant to search his home, a pricey condo in upscale Avondale Estates, far beyond the means of most ice-cream vendors. That search turned up only one thing of interest: a key to a small brick bungalow off Ponce DeLeon Avenue. When the officers went there, they walked into two rooms of state-of-the-art servers, then two other rooms full of videotapes so sick, they made even the vice cops queasy. But what had gotten Dwayne T. Pugh remanded to the custody of Deckard County was his basement. A cinder-block room with a rusty drain in the middle of the floor, it held an array of expensive videotaping equipment and two large cages. In one barked a pair of snarling, starved Dobermans; in the other huddled Jasmine, nude and sobbing in her own excrement. Though Dwayne T. Pugh swore that he'd never seen Jasmine, knew nothing about any dogs, and had rented the house for the past three years to a man named Harvey Barrett, the Deckard County detectives were convinced Pugh had earned his posh condo and a seven-figure bank account filming African-American children for an Internet porn business called Chocolate Non-Pareils. Now all Mary had to do was convince a jury of the same thing; for that, she needed Jasmine, the only person who could actually tie Pugh to all of it.

"Don't you think she did better?" Danika asked Mary hopefully.

"You keep on her, she'll quit that screaming. She just needs to toughen up." Danika, who'd dribbled her way out of Jasmine's neighborhood on a basketball scholarship from UCLA, had less sympathy for the little girl, maintaining that the only way to survive the streets was to become tougher than the streets themselves.

"Danika, we're supposed to help the victims of crimes, not traumatize them further."

The tall, stork-like woman snorted. "Better to traumatize one and keep twenty more out of that basement."

Mary started to caution her zealous young colleague again, but the opening strains of the "William Tell Overture" started to erupt from her desk. She reached over and grabbed her new cell phone, a state-of-the-art gizmo that could receive photos as well as text messages. The new DA had passed out a dozen to his senior staff "so we can be in touch at all times."

As she fumbled with the unfamiliar buttons, an instant e-mail message appeared on the screen.

"You want me to call Jasmine's mother? Set up another interview?"

"No. Come over to my house tonight. We'll go over the evidence files and see if there's anybody else we can pull out of the hat."

"Seven's good," replied Mary, fighting a deep, sucking feeling of defeat as she headed toward the door.
When Jim Falkner had, on the advice of his cardiologist, retired, Hobson T. Mott, or more correctly, Hobson T. Mott's wife Linda, had completely redone Jim's office, swooping down on the room with a Buckhead decorator and two suitcases full of upholstery samples. Within a week Jim's old red leather armchairs had been replaced by calfskin ergonomic seating systems. The Georgia Code Annotated now sat on chrome bookshelves, and where Jim had once sprawled at a battered mahogany desk, Hobson Mott perched behind a glass-topped table that seemed to float in midair. To Mary, going to Mott's office felt like reporting to the bridge of the starship Enterprise. Mott, however, was no Captain Kirk. Originally from Indianapolis, Mott had spent his college years playing basketball for the chair-throwing Bobby Knight. He was still obsessed with the game--a crop of gold trophies sprouted from his credenza, and he often referred to court with terms like "a slam-dunk case" and "an air ball defense." Mary had heard that he'd hired Danika not because of her stellar law credentials, but because he needed a good center for the department basketball team.

She tapped on Mott's open door. "You wanted to see me?"

Mott raised his eyebrows. Though he was tall and broad-shouldered, he had an unfortunate cast to his skin that made him look like one of the clay heads over in forensic anthropology.

He motioned her forward. "Come in, Ms. Crow."

Closing the door behind her, she perched on the ergonomic chair that most closely approximated her favorite seat during Falkner's tenure. She repressed a sigh. How they all did miss Jim! Although the Deckard County DA now had a much trendier office, the Deckard Country ADAs had sought justice much more happily when sloppy old Jim was in charge. They could do nothing about that, though. If the voters of Deckard County elected a jackass, you dealt with the jackass or sought employment elsewhere.

"Virginia Kwan throwing you any curves?"

"Not really. I moved to allow taped testimony, given the age of the witnesses. She objected, saying her client has the right to see his accusers. Judge Cate sided with her."

"You've gone up against Kwan before, haven't you?"

"I've beaten her once." Mary thought of the last time she had faced off against Virginia Kwan, a diminutive woman of Chinese ancestry who wore stiletto heels and blood-red nail polish, and was nicknamed "Dragon Lady" by the denizens of the courthouse. Mary had won, but it had been a hard trial, and the next day Virginia had ...

1. Call the Devil by His Oldest Name

2. Call the Devil by His Oldest Name

3. Call the Devil by His Oldest Name Bissell, Sallie

4. Call The Devil By His Oldest Name