Items related to The Murder Book (Alex Delaware, No. 16) 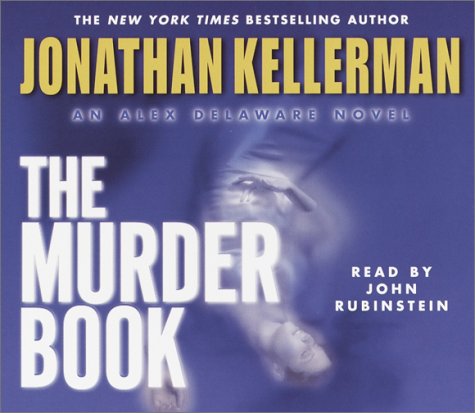 In seventeen consecutive bestselling novels, Jonathan Kellerman has distinguished himself as the master of the psychological thriller. Now in Kellerman’s most compelling and powerful novel yet, L.A. psychologist-detective Alex Delaware confronts a long-unsolved murder of unspeakable brutality—an ice-cold case whose resolution threatens his survival, and that of longtime friend, homicide detective, Milo Sturgis.

The nightmare begins when Alex receives a strange package in the mail with no return address. Inside is an ornate album filled with gruesome crime scene photos—a homicide scrapbook entitled The Murder Book. Alex can find no reason for anyone to send him this compendium of death, but when Milo views the book, he is immediately shaken by one of the images: a young woman, tortured, strangled, and dumped near a freeway ramp.

This was one of Milo’s first cases as a rookie homicide cop: a vicious killing that he failed to solve, because just as he and his training partner began to make headway, the department closed them down. Being forced to abandon the young victim tormented Milo. But his fears prevented him from pursuing the truth, and over the years he managed to forget. Or so he thought.

Now, two decades later, someone has chosen to stir up the past. As Alex and Milo set out to uncover what really happened twenty years ago, their every move is followed and their lives are placed in jeopardy. The relentless investigation reaches deep into L.A.’s nerve-centers of power and wealth—past and present. While peeling back layer after layer of ugly secrets, they discover that the murder of one forgotten girl has chilling ramifications that extend far beyond the tragic loss of a single life.

A classic story of good and evil, sacrifice and sin, The Murder Book is a gripping page-turner that illuminates the darkest corridors of the human mind. It is a stunning tour de force.
From the Hardcover edition.

When L.A. psychologist Alex Delaware receives an elaborate album filled with gruesome crime-scene police photos of a series of apparently unconnected killings, he's stymied. He's also in the midst of a personal crisis--Robin, his long-suffering partner, has made it clear that it's up to Alex to heal the breach in their relationship that's been caused by his over-involvement in criminal investigations. The pictures mean nothing to him, but one image gets his policeman pal Milo Sturgis's immediate attention--the victim was one of his rookie cases, and her murder was never solved, perhaps because someone much higher up in the department didn't want it to be. Was the anonymous mailer attempting to reach Milo through Alex? If so, the package has the desired effect, as the two men team up to find the connection between the cases highlighted in the murder book and whoever sent it. The trail leads to a retired cop, an old mentor of Alex's, and a wealthy, powerful family that will stop at nothing to keep its secrets and its victims buried forever. Kellerman pays more attention to Alex's midlife blues than he needs to, but his focus on Milo's experiences as a gay cop in a homophobic department fits seamlessly into both plot and narrative. --Jane Adams

Jonathan Kellerman is one of the world’s most popular authors. He has brought his expertise as a clinical psychologist to numerous bestselling tales of suspense (which have been translated into two dozen languages), including fifteen previous Alex Delaware novels; The Butcher’s Theater, a story of serial killing in Jerusalem; and Billy Straight, featuring Hollywood homicide detective Petra Connor. His most recent novel is Flesh and Blood. He is also the author of numerous essays, short stories, and scientific articles, two children’s books, and three volumes of psychology, including Savage Spawn: Reflections on Violent Children. Jonathan Kellerman has won the Goldwyn, Edgar, and Anthony awards, and has been nominated for a Shamus Award. He and his wife, the novelist Faye Kellerman, have four children.
From the Hardcover edition.