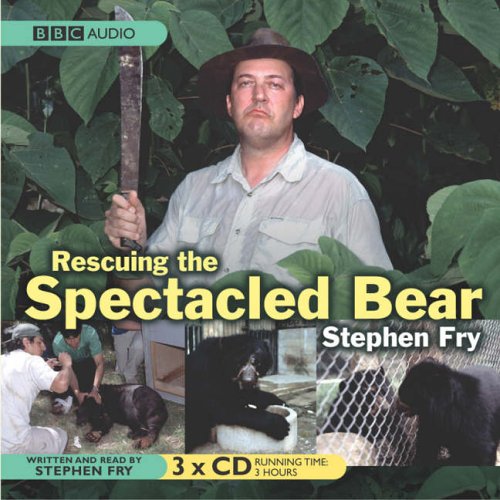 The inspirational book "Rescuing the Spectacled Bear" is read by Stephen Fry and also includes a specially recorded update by the author on the Bear Rescue project. Stephen Fry first travelled to Peru to investigate Paddington Bear's origins in the BBC documentary, "Paddington Bear: The Early Years". However, the surprise star of the show turned out to be a real live bear named Yogi. He was a Spectacled Bear so called due to the markings around the eyes but had been captured by the people of a small village high in the Andes and had lived in a tiny cage, barely large enough for him to turn around in, for two years. Thanks to some bartering, he was released and taken to a new enclosure at the bottom of Peru's greatest man-made treasure, Machu Picchu. This was the beginning of Stephen's obsession with Spectacled Bears and their destiny. A charitable foundation Bear Rescue was then established for the purpose of rescuing distressed bears, to purchase land for their exclusive use and to pursue research into their numbers, their habitat and their future. Then it was back to Peru for the second documentary. Stephen Fry and the Spectacled Bears was devoted entirely to the welfare of the Spectacled Bear and the attempts to keep the species from extinction. During this trip Stephen kept a diary. The diary became the book, "Rescuing the Spectacled Bear", which has now been exclusively read in its entirety by Stephen Fry for this recording.

Stephen Fry is an actor, producer, director, and writer who has starred in numerous TV series including Blackadder, Jeeves & Wooster, and the sketch show A Bit of Fry & Laurie. He is the bestselling author of four novels as well as several works of nonfiction.

"Charming ... His compilation of crotchets can be both compelling and cockamamie." — The Wall Street Journal

"Heartbreaking, a delight, a lovely, comfy book." — –The Times (London)

"You'd have to be not just very smart but witty, humorous and inventive to have had the career he has, but still more to encapsulate so much of it, playfully yet seriously, in this book."

Book Description BBC Audiobooks Ltd, 2005. Condition: Good. Ships from the UK. Former Library book. Shows some signs of wear, and may have some markings on the inside. Seller Inventory # GRP80370930

Shipping: US$ 5.20
From United Kingdom to U.S.A.
Destination, rates & speeds