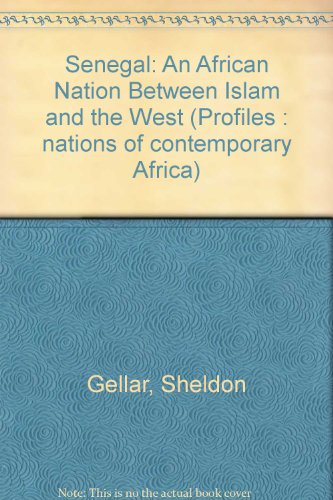 A West African nation with a rich political and cultural heritage, Senegal continues to serve as a role model for francophone Africa despite its weak economic base and small population. Its status as both a Sahelian and a maritime country brought its people into early contact with Islam and the West, making Senegal a crossroads where traditional African, Islamic and European cultures met and blended. In this exploration of Senegal, the author begins with discussion of the influence of Islam, Western imperialism and French colonial rule, and by tracing the country's political, economic and social evolution since independence. This expanded second edition also analyzes developments since 1983, looking in particular at the state of multi-party democracy, the 1993 national elections, the deterioration of the political climate following the assassination of the vice-president of the Constitutional Council, and the devaluation of the CFA franc. The book closes with an assessment of the social and cultural trends that have contributed to Senegal's emergence as one of Africa's most important cultural centres.

Buy Used
Condition: Good
1982Hardback with dustjacket in... Learn more about this copy

1. Senegal: An African Nation Between Islam and the West

2. Senegal: An African Nation Between Islam and the West

Book Description Westview Press, 1982. Condition: Good. This is an ex-library book and may have the usual library/used-book markings inside.This book has hardback covers. In good all round condition. Dust Jacket in fair condition. Seller Inventory # 8073526

Book Description Dartmouth Publishing Co Ltd, 1983. Condition: Good. A+ Customer service! Satisfaction Guaranteed! Book is in Used-Good condition. Pages and cover are clean and intact. Used items may not include supplementary materials such as CDs or access codes. May show signs of minor shelf wear and contain limited notes and highlighting. Seller Inventory # 0566005514-2-4

4. Senegal: An African Nation Between Islam and the West

Book Description Dartmouth Publishing Co Ltd, 1983. Condition: Good. Former Library book. Shows some signs of wear, and may have some markings on the inside. Seller Inventory # GRP76161588

5. Senegal: An African Nation Between Islam and the West