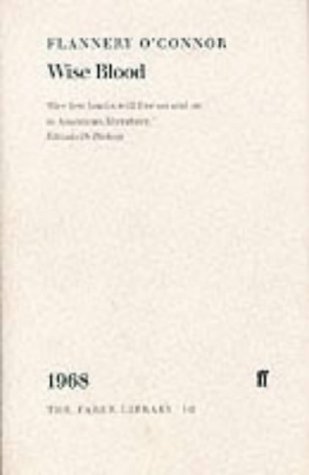 One of a series of titles first published by Faber between 1930 and 1990, and in a style and format planned with a view to the appearance of the volumes on the bookshelf. Flannery O'Connor's first novel concerns a man who, released from the armed services, returns to the evangelical Deep South.

Review:
Wise Blood is a comedy with a fierce, Old Testament soul. Flannery O'Connor has no truck with such newfangled notions as psychology. Driven by forces outside their control, her characters are as one-dimensional--and mysterious--as figures on a frieze. Hazel Motes, for instance, has the temperament of a martyr, even though he spends most of the book trying to get God to go away. As a child he's convinced that "the way to avoid Jesus was to avoid sin." When that doesn't work, and when he returns from Korea determined "to be converted to nothing instead of evil," he still can't go anywhere without being mistaken for a preacher. (Not that the hat and shiny glare-blue suit help.) No matter what Hazel does, Jesus moves "from tree to tree in the back of his mind, a wild ragged figure motioning him to turn around and come off into the dark..."

About the Author:
Flannery O'Connor was born in Savannah, Georgia in 1925, the only child of Catholic parents. In 1945 she enrolled at the Georgia State College for Women. After earning her degree she continued her studies on the University of Iowa's writing program, and her first published story, 'The Geranium', was written while she was still a student. Her writing is best-known for its explorations of religious themes and southern racial issues, and for combining the comic with the tragic. After university, she moved to New York where she continued to write. In 1952 she learned that she was dying of lupus, a disease which had afflicted her father. For the rest of her life, she and her mother lived on the family dairy farm, Andalusia, outside Millidgeville, Georgia. For pleasure she raised peacocks, pheasants, swans, geese, chickens and Muscovy ducks. She was a good amateur painter. She died in the summer of 1964.