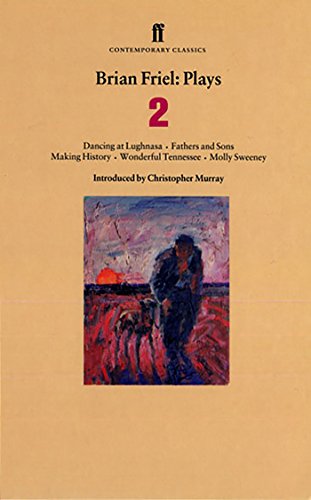 Introduced by Christopher Murray, this second collection of Brian Friel's plays includes some of his most acclaimed work for the stage.

From the troubled family life of five sisters in 1930s Donegal that is the core of Dancing at Lughnasa (now a major motion picture starring Meryl Streep) to the current-day birthday celebration that is the major external event of Wonderful Tennessee, Brian Friel demonstrates his emotional range and empathy for his characters. He evokes not simply the interior landscape of human beings trapped in their domestic situation but the wider landscape-interior and exterior-of which they are a part.

Brian Friel was born in Omagh, County Tyrone (Northern Ireland) in 1929. He received his college education in Derry, Maynooth and Belfast and taught at various schools in and around Derry from 1950 to 1960. He is the author of many plays that have taken their place in the canon of Irish Literature, including Philadelphia, Here I Come! (1964), Lovers (1967), Translations (1980), The Communication Cord (1982), and Dancing at Lughnasa (1990). In 1980 he founded the touring theatre company, Field Day, with Stephen Rea.

“The play, brilliantly constructed, is the best Friel has yet written.” ―Observer on Dancing at Lughnasa

“A delicately written play that subtly alters the emphasis of Turgenev's book in the light of modern experience.” ―Guardian on Fathers and Sons (after Turgenev)

“This is Friel's most accomplished and important play since Translations...It has the same suppleness of argument and beauty of writing.” ―Financial Times on Making History

“Friel is a master...The play is a brilliantly notated fugue of laughter and lament.” ―New Yorker on Wonderful Tennessee

“A dramatic poem of cumulative power and irresistible poignancy.” ―Observer on Molly Sweeney

“Of all the contemporary authors, there is no one I admire more highly than Brian Friel...Molly Sweeney is magnificent, and I read it with great joy.” ―Peter Brook on Molly Sweeney

“Once again, Friel has achieved a masterpiece.” ―Independent on Sunday on Molly Sweeney

Book Description Paperback. Condition: New. 1st. Paperback. This second collection of Brian Friel's plays includes some of his most acclaimed work for the stage. The plays included are Dancing at Lughnasa, Fathers and Sons, Making History, Wonderfu.Shipping may be from multiple locations in the US or from the UK, depending on stock availability. 544 pages. 0.426. Seller Inventory # 9780571197101