Items related to Crackup at the Race Riots

Crackup at the Race Riots 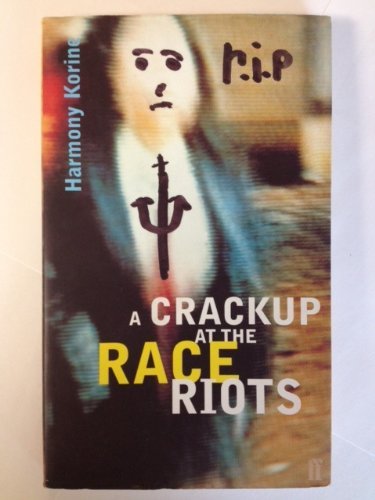 Harmony Korine burst onto the scene with his screenplay for Kids - a film so gritty and unsettling in its depiction of teenage sex that it was almost banned in the UK. A Crackup at the Race Riots is similarly controversial. The novel is without plot, linear narrative, character development or scene setting. In other words, it is totally original. The book is a montage that takes literary convention and explodes it in a sequence of half-remembered scenes, suicide notes, dialogue fragments, movie ideas, rumours and jokes. Korine captures the fragmented moments of a life observed through the demented lens of media, tv and teen obsession. Korine's darkly bizarre imaginationhas created the ultimate post-postmodern novel - funny, offensive, depraved and sad.

Ritalin kid, Harmony Korine burst on the scene with Kids, a film so gritty and unsettling in its depiction of teen life that it was slapped with an NC-17 rating and banned in some theaters across the country. In some ways, the media frenzy over the rating overshadowed the harrowing portrait of teenagers destroying their lives and the then twenty-one-year-old screenwriter who created them. "Whether you see the movie as a masterpiece or as sensationalism," wrote Lynn Hirshberg, "the movie is relentless and brilliant and extremely disturbing. It's powerful-both steel-eyed and sexy; horrifying and captivating."
Now, in this first book of fictional set pieces, Korine captures the fragmented moments of a life observed through the demented lens of media, TV, and teen obsession. Korine reinvents the novel in this highly experimental montage of scenes that seem both real and surreal at the same time. With a filmmaker's eye and a prankster's glee, thi

Harmony Korine is the director of the films Gummo, Julien Donkey-Boy, Mister Lonely, Spring Breakers, and Trash Humpers, as well as music videos for artists such as Cat Power, Sonic Youth, and Will Oldham. He was the writer of the film Kids. He lives in Nashville, Tennessee.

1. A Crackup at the Race Riots

Book Description Faber and Faber, 1999. Paperback. Condition: Good. A slight tan to page edges Good condition is defined as: a copy that has been read but remains in clean condition. All of the pages are intact and the cover is intact and the spine may show signs of wear. The book may have minor markings which are not specifically mentioned. Most items will be dispatched the same or the next working day. Seller Inventory # wbb0012697377

2. A Crackup at the Race Riots

3. A Crackup at the Race Riots

4. A Crackup at the Race Riots

5. A Crackup at the Race Riots

6. A Crackup at the Race Riots (a first printing)

7. A Crackup at the Race Riots (AN ARCHIVE FABER COPY/ FIRST PRINTING)

8. Crackup At The Race Riots

Book Description Faber & Faber 1999-01-01, 1999. Paperback. Condition: Very Good. Item is in very good condition. If supplemental codes/CDs for textbooks are required please contact us prior to purchasing as they may be missing. Seller Inventory # DS-0571197957-2

9. Crackup at the Race Riots