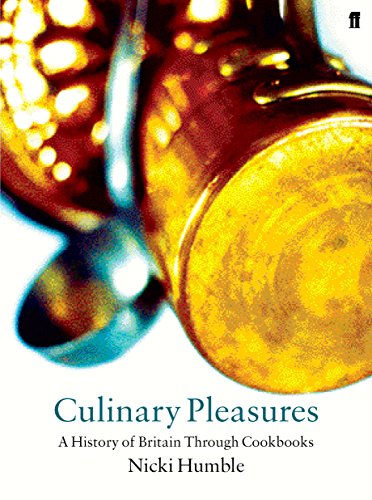 "Culinary Pleasures" takes a unique look at Britain's culinary evolution - a journey expressed through the development of its cookbooks. This wonderfully accessible book spans the diverse panorama of British cooking, from Mrs Beeton to nouvelle cuisine, concluding with the rise of the 'celebrity chef' and our attendant obsession with ever-fancier and ultra-modern forms of food preparation. What makes this book particularly extraordinary is Nicola Humble's ability to 'float adjacent to the historical moment', capturing with a subtle eye all the great changes in British cooking down the years, whilst also revealing its inextricable link to Britain's cultural shifts in sophistication and taste. From collared calf's head with buttered nettles to egg-and-avocado pate to fish-and-porcini pie; from soggy carrots to asparagus al dente, this book has it all. Punctuated throughout with recipes reflective of their period as well as evocative images, "Culinary Pleasures" is a complete delight for anyone with an interest in food, and also constitutes a fascinating record of Britain's ever-evolving cultural attitudes.

Nicola Humble was born in Singapore in 1964 and grew up all over England, with six years in Germany. She studied English at Wadham College, Oxford, followed by a PhD on Robert Browning and history. She has been a university lecturer for fifteen years teaching at various Oxford University Colleges and then Exeter University. She has been at Roehampton University since 1992 where she teaches nineteenth and twentieth-century English literature, including a course on the literature of food which is the first in the country.
Nicola edited the Oxford World's Classics edition of Mrs Beeton's Household Management which garnered a lot of publicity.
She now lives in Lewes with her husband and young son.

Culinary Pleasures won Guild of Food Writers, Best Food Book of 2006 and Gourmand World Cookbook Awards 2005, Special Award of the Jury. It has also been shortlisted for the 2005 Andre Simon Memorial Award and Longman - History Today Book of the Year Award 2007.

"'This book deserves the attention of every thoughtful foodie... An excellent account of the revival of our native culinary traditions which have, since the war, shrugged off their sense of inferiority to fancy foreign food.' Independent on Sunday 'A terrific book: a thoughtful, intelligent, highly readable account of the influence of the written word on Britain's culinary habits.' Literary Review"