Items related to The Smith of Smiths: Being the Life, Wit and Humour...

Pearson, Hesketh The Smith of Smiths: Being the Life, Wit and Humour of Sydney Smith

The Smith of Smiths: Being the Life, Wit and Humour of Sydney Smith 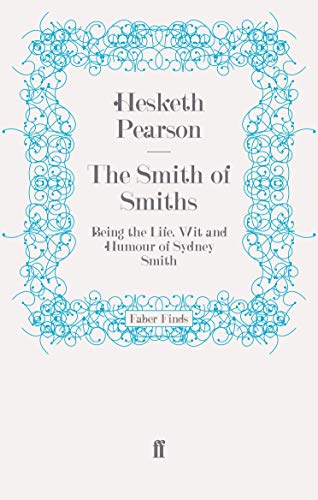 Queen Victoria was amused! It may seem unlikely but the preface to this famous biography is given over to quotes from his contemporaries. Not all the quotes are favourable but the roll-call is dazzling: Byron, Macaulay, Walter Scott, George III and IV, Disraeli, Sheridan, Dickens etc. Queen Victoria herself is not actually quoted but 'from various sources' Hesketh Pearson records,' Queen Victoria used to go into fits of laughter at the sayings of Sydney Smith, which were repeated to her by Lord Melbourne.' From the same section we also learn, somewhat surprisingly, that Abraham Lincoln was an admirer, too, and that when Sarah Siddons,'who never jeopardized her deportment in society as a tragedy queen by lapsing into laughter' first met Sydney Smith she 'developed convulsions, and had to be helped from the table.' Richard Ingrams has written, 'that of all his (Hesketh Pearson's) subjects Sydney Smith came closest to his own in character, and for that reason the book is probably his masterpiece.' There is no reason to dissent from that, especially when one remembers writers of the calibre of Graham Greene, Max Beerbohm and P. G. Wodehouse were such enthusiasts for it. And the title? Wishing to pay him the ultimate compliment, it was Macaulay who dubbed Sydney Smith, 'The Smith of Smiths'.

Hesketh Pearson (1887-1964) is best remembered as a biographer and not as a dutiful one. He once said, 'I love people who blow respectability and the Establishment to bits. Hence my portrait gallery.' He wrote over twenty biographies which, in addition to Sydney Smith, included ones on Hazlitt (The Fool of Love), Tom Paine, Bernard Shaw, Oscar Wilde, Dickens and Disraeli. Before finding his true vocation, Hesketh Pearson had been an actor with Sir Beerbohm Tree's company. Notoriety fell on him in 1926 with the anonymous publication of The Whispering Gallery: Leaves from a Diplomat's Diary. In the words of the Daily Mail the book was 'a scandalous fake' and a series of 'monstrous attacks on public men.' Pearson was unmasked as the author. He was put on trial for obtaining money under false pretences. When asked why he had pretended to be a diplomat he answered disarmingly, 'because I was mad.' He was acquitted. When he died his great friend Malcolm Muggeridge wrote in the Times, 'Pearson loved the English countryside and bells sounding across it: the English Language and all who tried in however a humble capacity to use it worthily.'

1. The Smith of Smiths: Being the Life, Wit and Humour of Sydney Smith

Book Description Faber and Faber, 2012. Paperback. Condition: Used; Good. **SHIPPED FROM UK** We believe you will be completely satisfied with our quick and reliable service. All orders are dispatched as swiftly as possible! Buy with confidence!. Seller Inventory # 3219546

2. The Smith of Smiths