Items related to If Hitler Comes: A Cautionary Tale

If Hitler Comes: A Cautionary Tale 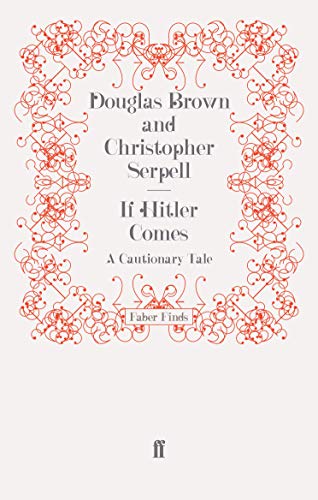 This novel was first published by Faber in August 1940 under the title, The Loss of Eden. It was then reissued by the British Publishers Guild (a wartime cooperative venture), in March 1941, with the more arresting and overt title, If Hitler Comes: A Cautionary Tale. It was a work of speculative fiction with a moral purpose. It was a counterblast to the waverers, to those of a defeatist mien who could convince themselves an arrangement between Great Britain and Nazi Germany wouldn't be such a bad thing after all. The original Faber book description asks, 'What would it be like in England, if, after a premature peace on plausibly equal terms, we found that this "peace" had merely delivered us completely into Hitler's hands?' It continues, 'The imaginary New Zealand journalist, writing retrospectively as an eye-witness from the security of the Antipodes, tell us what happened - or rather what might have happened. And so precise and logical does he make the narrative, so real the characters, so vivid the scenes, that in reading we are almost persuaded that it did happen. Then we say: "Nothing could be worse than that!" In their foreword and dedication, the authors, Douglas Brown and Christopher Serpell, write: 'This is no fanciful picture. It is painted from life, with England as the background instead of Bohemia or Poland or any other country now under the Nazi heel. It is not intended to cause despondency or alarm, but to confirm and justify that resolution with which we are now fighting. If such a tale is to have a dedication it can only be to: THOSE WILL NOT LET THIS HAPPEN' 'It is a work of fiction, but the authors write so convincingly and have so keenly observed recent events and the men who have helped to fashion them that their narrative reads like a true historical picture of England with Hitler and the Nazis in control. This remarkable book should be widely read, not merely as an awful warning, but also because it is so movingly and skilfully written.' Education 'The events it describes are so appallingly life-like that I found it difficult to remember that I was only reading a 'novel' . . . If the Ministry of Information want to attack defeatism, they should distribute free copies throughout Whitehall and the country houses of England.' New Statesman and Nation

Christopher Serpell was born in Leeds in 1910, the son of the senior master of Leeds Grammar School. After school he went to Merton College Oxford where he studied Classics. His first job was as a cub reporter with the Yorkshire Post, after which he moved to the London Times sometime in the 1930s where he remained as a reporter until the outbreak of war. In April 1939 he married Jean Crichton, his wife and companion for the next 46 years. Too short-sighted for military service during the War, he served in naval intelligence where his first boss was Ian Fleming (of James Bond fame). After the war he joined the BBC and served as its Rome Correspondent for seven years. In 1953 he was promoted to Washington Correspondent where he covered, among other events, Nikita Khrushchev's state visit to the USA, the McCarthy era anti-communist 'witch hunts,' and the Cuban Revolution. In 1960 he, Jean and their four children moved back to Britain where he was appointed Foreign News Editor at Alexandra Palace in North London. Unsuited to desk work, however, he soon resumed the peripatetic life as the BBC's Diplomatic Correspondent and remained in this post until his retirement in 1975. He continued, nevertheless, to feature regularly on the BBC World Service long after this, and remained a frequent contributor to The Listener and other current affairs journals. His family and friends remember him best as a brilliant raconteur and story-teller with a seemingly inexhaustible supply of extraordinary and usually hilarious anecdotes from his long career as a foreign correspondent. He died peacefully at home in Barnes, South London, in 1991.

1. If Hitler Comes: A Cautionary Tale