Items related to The Swordbearers 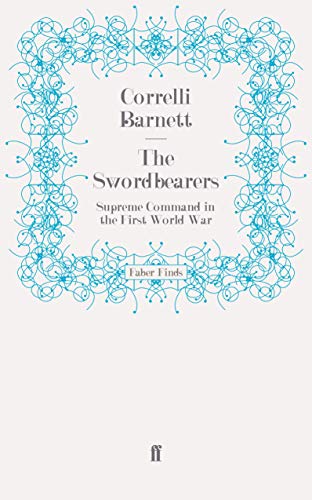 Von Moltke and 'quick victory': Jellicoe and the Battle of Jutland: Petain and the wave of mutinies: Ludendorff and the 1918 offensives. Four key men, four key moments in the Great War. Corelli Barnett, in his famous study, writes with brilliant insight about these flawed men grappling with events that were outside their comprehension. In his preface he writes thus: 'The Theme of this book is the decisive effect of individual human character on history. The background, in sharpest contrast, is a sudden and violent transition to mass collectivised life - to twentieth century industrial civilization. The principal actors are four national commanders-in-chief: two German, one Frenchman, one Englishman. Theirs was the novel task of directing these new and terrifying forces of mass powering battle. Each had been born and bred in the last century; each belonged to a highly conservative profession. Their abilities and defects reflected and illustrated those of their countries. For the historian, with the priceless gift of hindsight, it is moving and fascinating, therefore, to study these men locked in struggle with events greater than themselves; to see their moments of clarity and prophesy, of optimistic self-delusion, of uncertainty, of despair. Each in turn, as commander-in-chief, bore his nation's sword at a period when the course of the war pivoted on his judgement and will: four actors in a continental tragedy of death and re-birth.'

Correlli Barnett is a world-renowned historian with particular prowess in military, naval, economic and social subjects. Faber Finds are reissuing his four volume The Pride and Fall sequence: The Collapse of British Power, The Audit of War, The Lost Victory, The Verdict of Peace, as well as The Swordbearers, Britain and her Army, 1509-1970 (winner of the Royal Society of Literature Heinemann Award) and Engage the Enemy More Closely (winner of the Yorkshire Post Book of the Year Award).