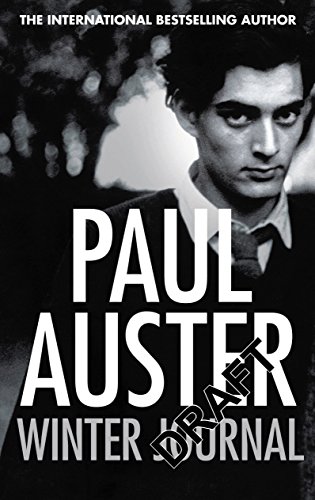 Amazon Best Books of the Month, August 2012: At nearly 64, one of our greatest modern writers is feeling his age. In his quietly transfixing new memoir, Winter Journal, Paul Auster meditates on what it means for his mind, body, and creativity to experience the unforgiving passage of time. This should be--and is--an intensely personal chronicle, but Auster makes the journey equally ours by inviting us into its unfolding. "No doubt you are a flawed and wounded person," he cautions, and suddenly you are. You are the player in this story: running away from your pregnant mother in a department store; learning to wrangle your adolescent hormones; taking an "inventory of your scars, in particular the ones on your face"; marveling at the beauty of your wife as she sleeps; moving in and out of 21 homes, recalling their addresses and aesthetics in astonishing detail. "Writing begins in the body, it is the music of the body," Auster notes. With Winter Journal, he reminds us that it is also the joyful, then melancholy, then reluctantly accepting soundtrack of our full and finite lives. --Mia Lipman

Paul Auster is the best-selling author of Winter Journal, Sunset Park, Man in the Dark, The Brooklyn Follies, The Book of Illusions, The New York Trilogy, among many other works. In 2006 he was awarded the Prince of Asturias Prize for Literature and inducted into the American Academy of Arts and Letters. Among his other honours are the Independent Spirit Award for the screenplay of Smoke and the Prix Medicis Etranger for Leviathan. He has also been short-listed for both the International IMPAC Dublin Literary Award (The Book of Illusions) and the PEN/Faulkner Award for Fiction (The Music of Chance). His work has been translated into more than thirty languages. He lives in Brooklyn, New York.