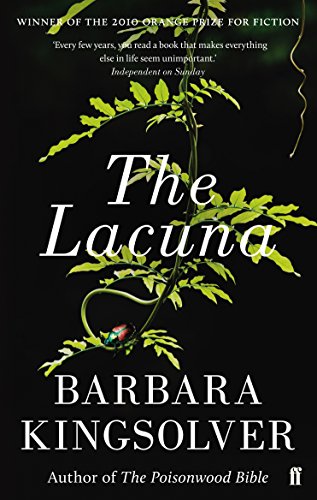 This Book is Brand new international softcover edition delivered within 7-12 working days via UPS/USPS/DHL and FEDEX.(FOR SALE ONLY U.S. & U.K.)

Barbara Kingsolver's thirteen books of fiction, poetry and non-fiction include the novels The Bean Trees and the international bestseller The Poisonwood Bible which, amongst other accolades, won the 2005 Penguin/Orange Reading Group Book of the Year award. Her most recent novel is The Lacuna.

Book Description Faber and Faber, 2013. Paperback. Condition: Used; Good. **SHIPPED FROM UK** We believe you will be completely satisfied with our quick and reliable service. All orders are dispatched as swiftly as possible! Buy with confidence!. Seller Inventory # 1894374

Book Description Faber & Faber, 2013. Condition: Fair. This is an ex-library book and may have the usual library/used-book markings inside.This book has soft covers. With usual stamps and markings, In fair condition, suitable as a study copy. Please note the Image in this listing is a stock photo and may not match the covers of the actual item,650grams, ISBN:9780571298822. Seller Inventory # 8421265

Shipping: US$ 12.29
From United Kingdom to U.S.A.
Destination, rates & speeds

Book Description Faber & Faber, United Kingdom, London, 2013. Paperback. Condition: Very Good. The Lacuna is the heartbreaking story of a man's search for safety of a man torn between the warm heart of Mexico and the cold embrace of 1950s McCarthyite America. Born in the U.S. and reared in Mexico, Harrison Shepherd is a liability to his social-climbing flapper mother, Salome. Making himself useful in the household of the famed Mexican artists Diego Rivera and Frida Kahlo, and exiled Bolshevik leader Lev Trotsky, young Shepherd inadvertently casts his lot with art and revolution. A violent upheaval sends him north to a nation newly caught up in World War II. In the mountain city of Asheville, North Carolina he remakes himself in America's hopeful image. But political winds continue to throw him between north and south, in a plot that turns many times on the unspeakable breach - the lacuna - between truth and public presumption. A gripping story of identity, loyalty and the devastating power of accusations to destroy innocent people. The Lacuna is as deep and rich as the New World. The book has been read, but is in excellent condition. Pages are intact and not marred by notes or highlighting. The spine remains undamaged. Seller Inventory # GOR005405479

Shipping: US$ 11.31
From United Kingdom to U.S.A.
Destination, rates & speeds