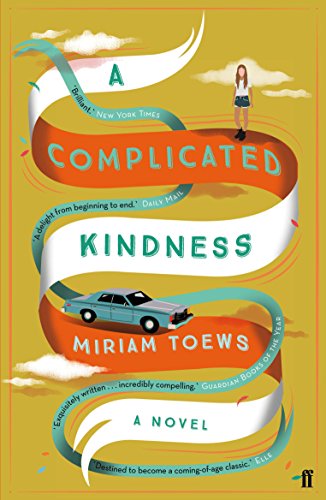 The highly anticipated third novel from one of Canada?s most daring and original writers, A Complicated Kindness is a portrayal of a stifling Mennonite town -- a novel that is at once brilliant, hilarious, and revelatory.

?Half of our family, the better-looking half, is missing,? Nomi tells us at the beginning of A Complicated Kindness. Left alone with her father, Nomi spends her time piecing together the reasons her sister Natasha and mother Trudie have gone missing and trying to figure out what she can do to avoid a career at Happy Family Farms, a chicken abattoir on the outskirts of East Village -- not the neighbourhood in Manhattan where Nomi most wants to live but a small Mennonite town in southern Manitoba. East Village is ministered by Nomi?s Uncle Hans, or as Nomi calls him, The Mouth. A fiercely pious and religious man, The Mouth has found both Trudie and Natasha wanting and has orchestrated their shunning by the community.

At its heart, A Complicated Kindness is the world according to a devastatingly funny and heartbreakingly bewildered young woman trapped in a small town that seeks to set her on the path to righteousness and smother her at the same time.

This town is so severe. And silent. It makes me crazy, the silence. I wonder if a person can die from it. The town office building has a giant filing cabinet full of death certificates that say choked to death on his own anger or suffocated from unexpressed feelings of unhappiness. Silentium. People here just can?t wait to die, it seems. It?s the main event. The only reason we?re not all snuffed at birth is because that would reduce our suffering by a lifetime. My guidance counsellor has suggested to me that I change my attitude about this place and learn to love it. But I do, I told her. Oh, that?s rich, she said. That?s rich. . .

We?re Mennonites. After Dukhobors who show up naked in court we are the most embarrassing sub-sect of people to belong to if you?re a teenager. Five hundred years ago in Europe a man named Menno Simons set off to do his own peculiar religious thing and he and his followers were beaten up and killed or forced to conform all over Holland, Poland, and Russia until they, at least some of them, finally landed right here where I sit. Imagine the least well-adjusted kid in your school starting a breakaway clique of people whose manifesto includes a ban on the media, dancing, smoking , temperate climates, movies, drinking, rock?n?roll, having sex for fun, swimming, makeup, jewellery, playing pool, going to cities, or staying up past nine o?clock. That was Menno all over. Thanks a lot, Menno. -- from A Complicated Kindness

Shipping: US$ 7.05
From United Kingdom to U.S.A.
Destination, rates & speeds

Book Description Paperback. Condition: Good. Connecting readers with great books since 1972. Used books may not include companion materials, some shelf wear, may contain highlighting/notes, may not include cdrom or access codes. Customer service is our top priority!. Seller Inventory # S_283127973

Book Description Paperback. Condition: Good. Ex library copy with usual stamps/stickers Good condition is defined as: a copy that has been read but remains in clean condition. All of the pages are intact and the cover is intact and the spine may show signs of wear. The book may have minor markings which are not specifically mentioned. Most items will be dispatched the same or the next working day. Seller Inventory # wbb0016913076

Shipping: US$ 11.71
From United Kingdom to U.S.A.
Destination, rates & speeds

Book Description Condition: Good. A+ Customer service! Satisfaction Guaranteed! Book is in Used-Good condition. Pages and cover are clean and intact. Used items may not include supplementary materials such as CDs or access codes. May show signs of minor shelf wear and contain limited notes and highlighting. Seller Inventory # 0571326072-2-4

Book Description Paperback. Condition: Very Good. The book has been read, but is in excellent condition. Pages are intact and not marred by notes or highlighting. The spine remains undamaged. Seller Inventory # GOR006938695

Book Description Paperback. Condition: Fair. A readable copy of the book which may include some defects such as highlighting and notes. Cover and pages may be creased and show discolouration. Seller Inventory # GOR007809020

Book Description Paperback. Condition: Very Good. WE ARE PROCESSING ORDERS AS NORMAL DURING THIS VIRUS EPIDEMIC, ALL ITEMS ARE SENT BY ROYAL MAIL. DISPATCHED FROM THE UK WITHIN 24 HOURS ( BOOKS ORDERED OVER THE WEEKEND DISPATCHED ON MONDAY) BY ROYAL MAIL. ALL OVERSEAS ORDERS SENT BY AIR MAIL. WE ALSO ACCEPT PAYMENT IN US DOLLARS OR EURO BY BANK TRANSFER. Seller Inventory # mon0000748837

Shipping: US$ 18.34
From United Kingdom to U.S.A.
Destination, rates & speeds