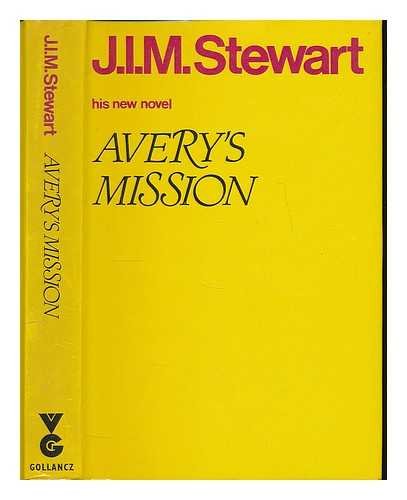 Bannerman is a schoolmaster on his way to Florence to do some research. On the plane, he meets a recent pupil, Avery Brenton, who is travelling to see his divorced father. However, Avery is young and naïve and is being unwittingly used by his domineering mother. Bannerman finds himself being drawn into matters. Avery’s father is working on a lifetime study of Italian art and is not that pleased to see him. Enter Mrs Mountpatrick, a friend of Avery’s mother, along with another youth who is helping his father. Very soon, a delightfully entangled and complex situation develops, only to be exacerbated by the arrival of Avery’s mother, a dominatrix who uses sex-appeal and a natural upper class manner to exert her will. The tale is told by Bannerman as narrator and is full of suspense to delight the reader right up to the unexpected end.

John Innes Mackintosh Stewart (who also wrote as 'Michael Innes') was born in Edinburgh where his father was Director of Education. He attended Edinburgh Academy before going up to Oriel College, Oxford where he was awarded a first class degree in English and won the Matthew Arnold Memorial Prize and was named a Bishop Frazer scholar. After a short interlude travelling with AJP Taylor in Austria, including studying Freudian psychoanalysis for a year, he embarked on an edition of Florio's translation of Montaigne's Essays. This subsequently helped him secure a post teaching English at Leeds University.In 1932, Stewart married Margaret Hardwick, who practised medicine, and they subsequently had three sons and two daughters. By 1935, he had been awarded the Jury Chair at the University of Adelaide in Australia as Professor of English and had also completed his first detective novel, 'Death at the President's Lodging', published under the pseudonym 'Michael Innes'. This was an immediate success and part of a long running series centred on 'Inspector Appleby', his primary character when writing as 'Innes'. There were almost fifty titles completed under the 'Innes' banner during his career.In 1946, he returned to the UK and spent two years at Queen's University in Belfast, before being appointed Student (Fellow and Tutor) at Christ Church, Oxford. He was later to hold the post of Reader in English Literature of Oxford University and upon his retirement was made an Emeritus Professor. Whilst never wanting to leave his beloved Oxford permanently, he did manage to fit into his busy schedule a visiting Professorship at the University of Washington and was also honoured by other Universities in the UK.Stewart wrote many works under his own name, including twenty-one works of fiction (which contained the highly acclaimed quintet entitled 'A Staircase in Surrey', centred primarily in Oxford, but with considerable forays elsewhere, especially Italy), several short story collections, and over nine learned works on the likes of Shakespeare, Kipling and Hardy. He was also a contributor to many academic publications, including a major section on modern writers for the Oxford History of English Literature. He died in 1994, the last published work being an autobiography: 'Myself and Michael Innes'.J.I.M. Stewart's fiction is greatly admired for its wit, plots and literary quality, whilst the non-fiction is acknowledged as being definitive.

Book Description Gollancz, 1971. Condition: Good. A+ Customer service! Satisfaction Guaranteed! Book is in Used-Good condition. Pages and cover are clean and intact. Used items may not include supplementary materials such as CDs or access codes. May show signs of minor shelf wear and contain limited notes and highlighting. Seller Inventory # 0575006250-2-4

Shipping: US$ 19.21
From United Kingdom to U.S.A.
Destination, rates & speeds