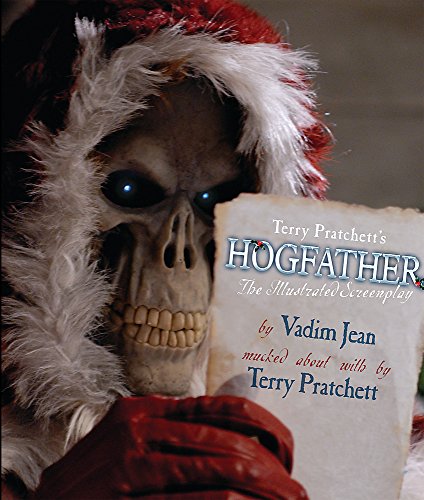 Hogswatchnight is fast approaching, and the Hogfather (that jolly fat man who delivers presents to the kiddies) is missing. But it's vital that all the presents are delivered, otherwise the sun won't rise tomorrow. However, there is another supernatural entity who can be everywhere at once and, most importantly, knows where everybody lives. And Death reckons that with a false beard and a few cushions, it might just work. And while Death is busy working out the mysteries of climbing down chimneys and drinking sherry, it's up to Susan to track down the real Hogfather. It's a dark time of the year. There are monsters afoot. And some of them look just like us. HO HO HO. You'd better watch out ...Terry Pratchett's bestseller, adapted and directed by Vadim Jean, is a BAFTA-winning two-part live-action/CGI film starring David Jason for Sky One.

Terry Pratchett is a true publishing phenomenon. He lives near Salisbury. Vadim Jean won international acclaim for his first film, LEON THE PIG FARMER, and lives in London. Stephen Player, who painted the storyboards for the film, is a Pratchett personal favourite. He lives in America. Vadim Jean won the Chaplin Award at Edinburgh, the International Critics Prize at Venice and the Evening Standard Award for best newcomer for his first feature film, LEON THE PIG FARMER. He lives in London. Stephen Player was born in England and currently lives in San Francisco, where he combines lecturing with painting.

Shipping: US$ 17.63
From United Kingdom to U.S.A.
Destination, rates & speeds