Items related to Knights of the Black Earth, The

Weis, Margaret & Perrin, Don Knights of the Black Earth, The

Knights of the Black Earth, The 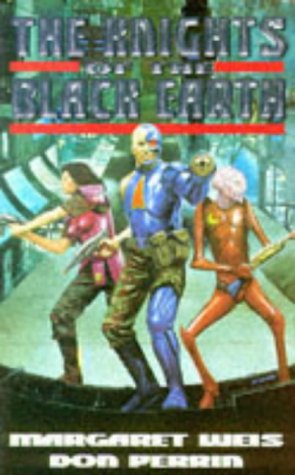 Weis (the Dragonlance series, etc.) returns to her Stars of the Guardians series (The Lost King, etc.), this time collaborating with military expert and first-time author Perrin, formerly of the Canadian Defense Department. Cyborg Xris and the six other members of his mercenary Mag Force 7 team are back as well, seeking to foil a plot to assassinate the galactic ruler, King Starfire. High-tech combat and violent death permeate the narrative, which initially focuses on Xris's mission to do away with his former colleague, the transsexual Darin Cowan/Darlene Mohini. Xris, who was once wholly human, believes that Cowan betrayed him, leading to the accident that left the Force ruler imprisoned in a cyborg body. When a foppish, drug-using member of the team is kidnapped during that mission, the Force discovers the plot by the Knights of the Black Earth to kill the king. Adventures and misadventures, leavened with plot twists, humor and ample quotes from Sun Tzu, follow. Unexpectedly subtle yet filled with fast-paced action, this above-average space opera will please Weis's many fans.
Copyright 1995 Reed Business Information, Inc.

With a new collaborator, Weis returns to the universe of her Star of the Guardians. Like that saga, this volume, clearly the first in another series, is the purest sort of swashbuckling space adventure, replete with action galore, perhaps a trifle more hardware than in Star, and a cast of characters that makes one think of Star Wars had it been scripted by Alexander Dumas. The resemblance of the cyborg Xris and his Mag Force 7 to Dumas' musketeers is impossible to overlook. On the other hand, the adventures are so numerous, the characters so engaging (if not necessarily original), and the fun Weis and Perrin had writing the book so obvious that it will be extremely difficult for action sf fans not to enjoy them all. Weis' name alone probably guarantees a respectable readership. Roland Green

1. Knights of the Black Earth, The