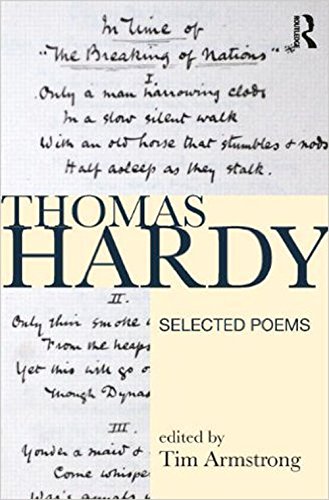 In Thomas Hardy: Selected Poems Tim Armstrong brings together over 180 poems in the first comprehensively annotated selection of Hardy’s poetry. Unlike most previous selections, this edition preserves the shape of the poet’s career by presenting the poems in the order in which they appeared in the Collected Poems of 1930, rather than re-ordering them thematically.

Head notes to each poem give the reader information about its composition, publication, sources and metrical scheme; on-the-page notes list significant variants in Hardy’s manuscripts, point out literary and other allusions, and give explanatory glosses. An appendix contains a selection of relevant passages from Hardy’s notebooks, letters, and autobiography; and a bibliography suggests further reading.

Tim Armstrong’s critical Introduction discusses Hardy’s career, his poetics, his use of memory and allusion and examines his position in the context of Victorian debates on aesthetics and belief. The generous selection of poems includes many lesser-known poems as well as those which have received most critical commentary, and the important elegiac sequence ‘Poems of 1912-13’ is included in its entirety.

Book Description Addison-Wesley Longman Ltd, 1993. Condition: Good. A+ Customer service! Satisfaction Guaranteed! Book is in Used-Good condition. Pages and cover are clean and intact. Used items may not include supplementary materials such as CDs or access codes. May show signs of minor shelf wear and contain limited notes and highlighting. Seller Inventory # 0582040612-2-4

Book Description Brand: Longman Group United Kingdom, 1993. Paperback. Condition: GOOD. Has little wear to the cover and pages. Contains some markings such as highlighting and writing. Supplemental materials are not guaranteed with any used book purchases. Seller Inventory # 0582040612_abe_gd

Book Description -. Paperback. Condition: Very Good. Selected Poems (Longman Annotated Texts) This book is in very good condition and will be shipped within 24 hours of ordering. The cover may have some limited signs of wear but the pages are clean, intact and the spine remains undamaged. This book has clearly been well maintained and looked after thus far. Money back guarantee if you are not satisfied. See all our books here, order more than 1 book and get discounted shipping. Seller Inventory # 7719-9780582040618