Items related to The Lion's Share: A Short History of British Imperialism... 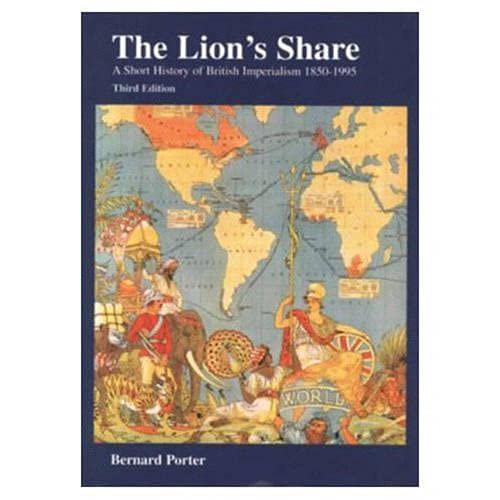 This leading general history of British imperialism, from its Victorian heyday to present times, has been thoroughly revised and updated. As well as presenting a lively narrative of events, Bernard Porter explores a number of broad analytical themes, challenging more conventional and popular interpretations. He sees imperialism as a symptom not of Britain's strength in the world, but of her decline; and he argues that the empire itself both aggravated and obscured deep-seated malaise in the British economy. A refreshing look at one of the central aspects of British history.

'As for Dr Porter's study, this reviewer found it one of the most captivating pieces he had read for a long time: his book abounds in wit, is studded with brief but telling phrases, and reveals an unerring eye for the relevant fact and apposite quotation'.

So wrote Paul Kennedy, reviewing the original 1976 text of The Lion's Share in the Historical Journal. The book scored an instant success, and rapidly established itself as the leading general history of British imperialism from its Victorian heyday to present times. An extended Second Edition appeared in 1984. Now, in time to celebrate its twentieth anniversary, Bernard Porter has taken the opportunity of a complete typographical reset to revise and update the full text for the first time. He has also added a wholly new concluding section, on the legacy of empire.

As before, he combines a lively narrative of events with a number of broad analytical themes that challenge more conventional interpretations of the progress of British imperialism. He sees it not as a symptom of Britain's strength in the world, but of her decline; and he argues that the empire both aggravated and obscured a deep-seated malaise in the British economy. Britain, he claims, was less in control of her empire than controlled by it, her freedom of action continually compromised by her need to hold on to the empire, until at last she was unable to do even that.

This splendid new Third Edition - revitalised by a decade of new scholarship, previously unavailable archival material, and the fresh perspectives that changing international events bring to our understanding of the past - is fully up-to-date again, while losing nothing of its original zest and vigour.

'a good book written in a very readable style which manages to be both scholarly and entertaining and which will do useful service as a textbook for a long time.' P.J.Cain, HISTORY
'the best synoptic view yet presented of the empire since the coming of the New Imperialism' Deryck Schreuder, HISTORICAL STUDIES

'a most valuable key to modern British colonial history. From this gripping and lucid exposition, we may gather an understanding not only of the initial intricacies of colonial problems...but of their alarming legacies.' Gerard Douds, HISTORY TODAY
'an extremely well-written, cleverly constructed book'
Andrew Porter, JOURNAL OF IMPERIALL AND COMMONWEALTH HISTORY
'The book is stil the best short study of its subject...Some will doubtless treat it as a textbook: and it is indeed full of accurate information, telling phrases and aptly-deployed quaotations, all presented in a very lively and readable manner. In fact, it is a clear, coherent and well substantiated interpretation...'
Iain R. Smith (of the Second Edition in the same journal)

BERNARD PORTER is Professor of Modern History, and Head of Department, at the University of Newcastle upon Tyne.

Bernard Porter is Professor of Modern History, and Head of Department, at the University of Newcastle-upon-Tyne.

Book Description Pearson, 1996. Condition: Good. 3rd Edition. Ships from the UK. Former Library book. Shows some signs of wear, and may have some markings on the inside. Seller Inventory # GRP97357048