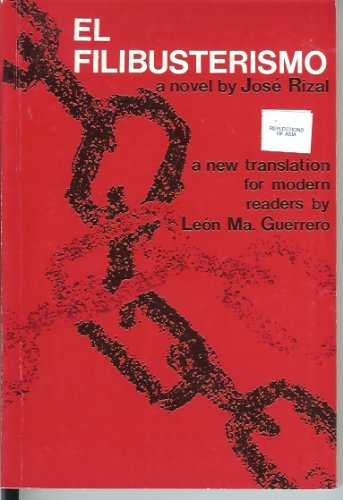 A completely new translation for the contemporary reader by Leon Ma. Guerrero "One is tempted to imagine that an agitator has secretly bewitched the friar-lovers and the reactionaries into favouring and promoting, all unwitting, a policy which can have only one aim: to spread subversive ideas throughout the country and to convince each and every Filipino that there is no solution except independence from the Mother Country." --Ferdinand Blumentritt TO THE FILIPINO PEOPLE AND THEIR GOVERNMENT The spectre of subversion has been used so often to righten us that , from being a mere nursery tale, it has acquired a real and positive existence, whose mere mention makes us commit the greatest mistakes. But putting aside the old practice of accepting the myth so as not to face the dreaded reality, we shall look it in the face, instead of running away, and with resolute if inexpert hand lift the shroud to expose to the multitude the structureof its skeleton. If the sight should lead our Country and its Government to reflexion, we shall be happy, no matter how our boldness may be censured, and though we should pay for it like the young novice of Thais, who sought to pierce the secret os sacerdotal impostures." --The Author Europe, 1891

Shipping: US$ 32.98
From United Kingdom to U.S.A.
Destination, rates & speeds

2. El Filibusterismo . a Sequel to Noli Me Tangere (the subversive)

Shipping: US$ 30.23
From United Kingdom to U.S.A.
Destination, rates & speeds