Items related to Fear of Flying 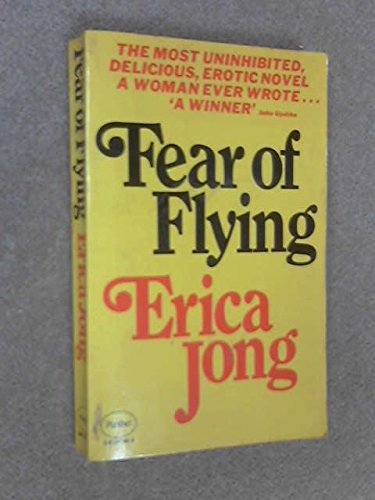 Originally published in 1973, the ground-breaking, uninhibited story of Isadora Wing and her desire to fly free caused a national sensation—and sold more than twelve million copies. Now, after thirty years, the iconic novel still stands as a timeless tale of self-discovery, liberation, and womanhood.

The modern classic that changed the way we thought about sex: Isadora Wing just wants to be free to find the perfect, guiltless, zipless sexual encounter, and pursues this ideal across two continents.

Erica Jong is the author of nineteen books of poetry, fiction, and memoir, including Fear of Flying, which has more than 18 million copies in print worldwide. Her most recent essays have appeared in The New York Times Book Review, and she is a frequent guest on television talk shows. Currently working on a novel featuring Isadora Wing—the heroine of Fear of Flying—as a woman of a certain age, Erica and her lawyer husband live in New York City and Connecticut. Her daughter, Molly Jong-Fast, is also an author.

Erica Jong left a Ph.D. program at Columbia to write her ground-breaking novel Fear of Flying, published in 1973. Jong is the author of numerous award-winning books of poetry and novels including Fanny, How to Save Your Own Life, Parachutes and Kisses, Any Woman’s Blues, and the forthcoming Sappho’s Leap. She is also the author of the memoir Fear of Fifty. She lives in New York City and Connecticut.

Book Description New American Library, 1975. Paperback. Condition: Used; Good. Dispatched, from the UK, within 48 hours of ordering. This book is in good condition but will show signs of previous ownership. Please expect some creasing to the spine and/or minor damage to the cover. Damaged cover. The cover of is slightly damaged for instance a torn or bent corner. Aged book. Tanned pages and age spots, however, this will not interfere with reading. Seller Inventory # CHL5165118

Shipping: US$ 2.42
From United Kingdom to U.S.A.
Destination, rates & speeds

Book Description Paperback. Condition: Good. The book has been read but remains in clean condition. All pages are intact and the cover is intact. Some minor wear to the spine. Seller Inventory # GOR004949623

Book Description Paperback. Condition: Very Good. The book has been read, but is in excellent condition. Pages are intact and not marred by notes or highlighting. The spine remains undamaged. Seller Inventory # GOR004948746

Book Description Grafton, 1974. Paperback. Condition: Good. VINTAGE MAY OR MAY NOT HAVE A DUST JACKET Usual signs of a well read book but good overall condition. May not look good on your bookcase after reading and probably not suitable as a present unless hard to find elsewhere MOST IMAGES ARE STOCK PHOTOS. IF YOU NEED A PARTICULAR EDITION PLEASE SEND US A MESSAGE BEFORE PURCHASING SO THAT WE CAN CHECK THAT THE ONE ON OFFER IS THE ONE YOU REQUIRE. SECURE DAILY POSTING FROM UK. 30 DAY GUARANTEE. Seller Inventory # mon0002793318

Shipping: US$ 4.54
From United Kingdom to U.S.A.
Destination, rates & speeds

Book Description Grafton 18/03/1976, 1976. Condition: Very Good. Shipped within 24 hours from our UK warehouse. Clean, undamaged book with no damage to pages and minimal wear to the cover. Spine still tight, in very good condition. Remember if you are not happy, you are covered by our 100% money back guarantee. Seller Inventory # 6545-9780586041499

Book Description Grafton 18/03/1976, 1976. Condition: Very Good. This book is in very good condition and will be shipped within 24 hours of ordering. The cover may have some limited signs of wear but the pages are clean, intact and the spine remains undamaged. This book has clearly been well maintained and looked after thus far. Money back guarantee if you are not satisfied. See all our books here, order more than 1 book and get discounted shipping. . Seller Inventory # 7719-9780586041499