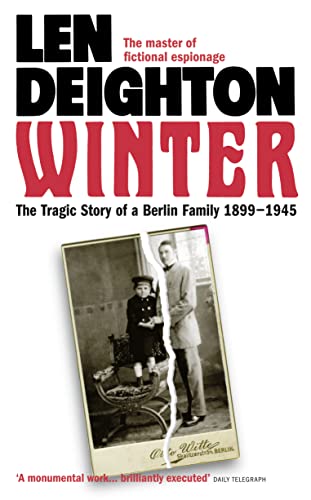 Epic prelude to the classic spy trilogy, GAME, SET and MATCH, that follows the fortunes of a German dynasty during two world wars.

Winter takes us into a large and complex family drama, into the lives of two German brothers - both born close upon the turn of the century, both so caught up in the currents of history that their story is one with the story of their country, from the Kaiser's heyday through Hitler's rise and fall. A novel that rings powerfully true, a rich and remarkable portrait of Germany in the first half of the twentieth century.

In his portrait of a Berlin family during the turbulent years of the first half of the century, Len Deighton has created a compelling study of the rise of Nazi Germany.

With its meticulous research, rich detail and brilliantly drawn cast of characters, Winter is a superbly realized achievement.

uli Winter are two very different brothers born into a time when the horrors of war engulf and extinguish the Germany that is. Yet for all their differences, the destinies of the two brothers are forever bound to the madness that lies ahead. From their sheltered childhood through their violent coming of age in the Great War . . . from the chaos of 1920 Berlin to the spreading power of Hitler . . . the brothers are wrenched apart by conflicting ideals and ambitions. Now mortal enemies, they are trapped in a holocaust that threatens to tear them -- and the world -- to pieces.

Born in London, Len Deighton served in the RAF before graduating from the Royal College of Art (which recently elected him a Senior Fellow). While in New York City working as a magazine illustrator he began writing his first novel, The Ipcress File, which was published in 1962. He is now the author of more than thirty books of fiction and non-fiction. At present living in Europe, he has, over the years, lived with his family in ten different countries from Austria to Portugal.