Items related to If dinosaurs were cats and dogs

McNaughton, Colin If dinosaurs were cats and dogs

If dinosaurs were cats and dogs 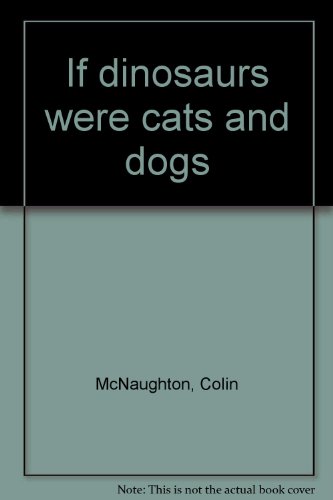 Rhyming text and illustrations show what would happen if dogs, cats, frogs, chickens, and other sorts of animals were dinosaurs and lived during the time of man.

PreSchool-Grade 2-- This updated version (Four Winds, 1981; o.p.) is more than revised; it contains a completely different text and new or reworked art. In the earlier book, each illustration was accompanied by a four-line poem that described how silly it would be if the world were inhabited by dinosaur-sized hens, cats, frogs, etc. McNaughton has given each animal a name (pigplodicus, chickasaur, snakeydon), but much of the humor has been lost. The appeal of the original version adapted by Alice Low was in reading about eggs winding up scrambled when laid from the height of a giant hen or in people skiing down the shell of a giant tortoise. Here the chickasaurs ``let fly'' with their eggs and ``The Tortosaur's a carnivore--/ He'll have your guts for starters!'' The text, previously succinct and gentle, now goes for meaningless action--the animals want to fight or eat the humans; while it's hardly harmful and is intended to be funny, it's just unnecessary. The exaggerated cartoons are sketchy and in some instances clever, but since most of them were in the original version, it's a mystery why McNaughton decided to revise an old favorite. This giant disappointment lands with a colossal thud. --Christine A. Moesch, Buffalo and Erie County Public Library, Buffalo, NY
Copyright 1992 Reed Business Information, Inc.

1. If dinosaurs were cats and dogs

Book Description Four Winds Press, 1981. Condition: Good. A+ Customer service! Satisfaction Guaranteed! Book is in Used-Good condition. Pages and cover are clean and intact. Used items may not include supplementary materials such as CDs or access codes. May show signs of minor shelf wear and contain limited notes and highlighting. Seller Inventory # 0590078267-2-4