Items related to Tyrannosaurus Was a Beast: Dinosaur Poems

Tyrannosaurus Was a Beast: Dinosaur Poems 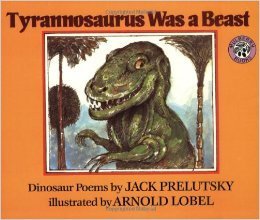 Arnold Lobel (1933-1987) was the award-winning author and illustrator of many beloved children's books, including the classic I Can Read books about Frog and Toad, and the Caldecott Medal winning Fables.

Grade 2-5 A dinosaur book collaboration between Arnold Lobel and Jack Prelutsky sounds almost too good to be true. And that's the case with this book, which has good intentions but doesn't quite carry through with them. No problem with Lobel's illustrations, which combine just the right amount of fantasy and realism to capture a child's imagination. It's Prelutsky's verse which is the detractor here. True, some of the poems are rollicking and fun, such as these lines describing Deinonychus: ``Ferocity was its predominant trait,/ its habits were purely predacious,/ it ate what it caught, and it caught what it ate/ in the days of the early Cretaceous.'' But for many of these poems, much of the verse seems confined by the subject matter, as if Prelutsky were afraid to let his imagination enhance what he considers factual information. Sadly, some of the information he reiterates about dinosaurs is out of date; the idea of small-brained, prehistoric plodders doomed for extinction is no more. Prelutsky would do well to get hold of a copy of Bakker's Dinosaur Heresies (Morrow, 1986) and update his perception of herbivores and Sauropods, in particular. Thoughtful pronunciation guides help readers tackle colossal dinosaur names, but young readers will still struggle with the many other multisyllabic words that set the cadence of these rhymes. Cathryn A. Camper, Minneapolis Public Library
Copyright 1988 Reed Business Information, Inc.

1. Tyrannosaurus Was a Beast: Dinosaur Poems

2. Tyrannosaurus Was a Beast Jack Prelutsky