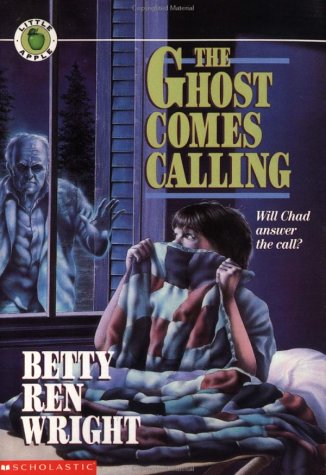 Having seen enough strange things to know that his family's cabin on Perch Lake is haunted, Chad, accompanied by his friend Jeannie, follows eerie visions and sounds to the side of a ghost with a story to tell. Reprint.

Gr. 3-6. With a taut sense of timing and shivery suspense, Wright revitalizes the story of the mean ghost who cannot rest. Chad Weldon likes the shabby log cabin his dad has bought on the lake. Then his bossy friend Jeannie (who always makes him feel uncertain) tells him the shack is haunted by the old man who built it: he died with a bitter grudge against the town, and he doesn't want anyone in his house. Slowly, in time-honored fashion, the ghost gets closer. First Chad feels him lurking in the woods, hears the eerie howl of the ghost's dog; then there's a gray scowling face at the window, a clawlike hand . . . until finally Chad finds the confidence to go beyond Jeannie and put right the wrong done to the old man long before. The contrast between the cozy domestic world and the ghostly disorder intensifies the pleasure of the story. Wright picks up our fear of the rustle in the woods, the shadow on the porch, the uncertainty outside and in. Hazel Rochman

Grade 3-4-Another mystery from a prolific and popular author. When nine-year-old Chad's father gets a good deal on an old log cabin by the lake, Chad's older and wiser acquaintance, Jeannie, implies that there may be a ghost on the premises, and she's right. Many years ago, Tim Tapper was accused of causing an accident while he was driving a group of children in his truck. The real culprit, however, was an icy road, and Tim actually saved the children from harm. Chad must figure out a way to put the wronged ghost to rest. The characters are sketched just completely enough to play their parts in the plot; the ghost is scary but not terrifying. Chad and Jeannie's relationship improves a bit as she reveals her own fear and lends her support, treating him more like an equal and almost as a friend. A satisfying story.
Carolyn Jenks, First Parish Unitarian Church, Portland, ME
Copyright 1994 Reed Business Information, Inc.