Items related to The Mystery at Kickingbird Lake (Ghost Twins) 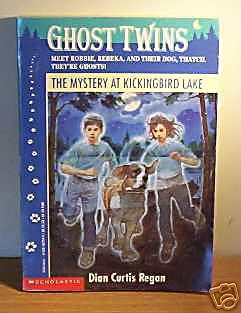 Fifty years after a boating accident, twins Robert and Rebeka Zuffel still haunt their old home, now a vacation rental, and when Kim comes to stay in the house and gets into trouble, the twins brush up their ghost skills. Original.

Kicking off the Ghost Twins series, Regan's (My Zombie Valentine) chipper novel will appeal to boys and girls alike. The story opens with a newspaper account dated August 25, 1942, describing the disappearance of Robbie and Rebeka Zuffel and their dog, Thatch, after a boating accident on Kickingbird Lake. Fifty years later, the family house-which the twins have been inhabiting as ghosts-is rented by the vacationing Shooks. No one has lived there for years, and the twins and their ghost pooch look on with curiosity as Scott and Kimmie, the Shook children, move onto their turf. Though the ghosts play a few harmless tricks (Rebeka keeps shutting the dresser drawer that Kimmie opens; Thatch mystifies the humans by snatching up a piece of bacon dropped on the kitchen floor), the two groups cohabit peacefully. But things heat up when Scott and Kimmie find-and hide-some treasure, which turns out to be various items the twins had with them the day they died. There is not a great deal of suspense, but Regan adds some excitement to her plot at the 11th hour. Humorous details, spry dialogue and characters that are, well, spirited, mark this as a promising series. Ages 7-12.
Copyright 1994 Reed Business Information, Inc.