Items related to Red Is For Murder: A Patrick Hardy Mystery (Patrick... 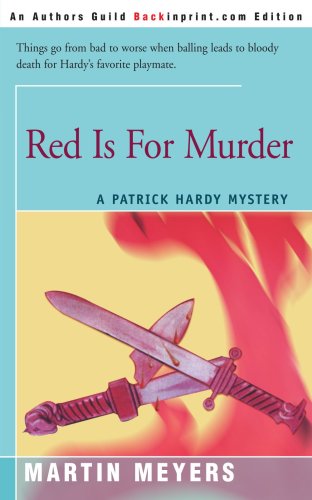 Kiss me, Kate, was an invitation that luscious Kate Arnheim almost never turned down, as a great many people discovered to their infinite pleasure. Patrick Hardy was one of them, and when a knife-wielding killer gave her one final kiss-off, blood wasnt the only red that Hardy saw. Hunting suspects in Kates little blue book was like going through a city telephone directory. Hardy found that he was learning more about his favorite sport than Dr. Reuben ever dreamed, he soon began to realize that the late, great Kates love life could be the death of him

Martin Meyers is the author of five Patrick Hardy Mysteries. Also an actor, Meyers is one-half of Maan Meyers(with his wife Annette). They are co-authors of six Dutchman History-Mysteries set in 17th, 18th and 19th century New York. The sixth in the series, The Lucifer Contract, is a Civil War thriller.