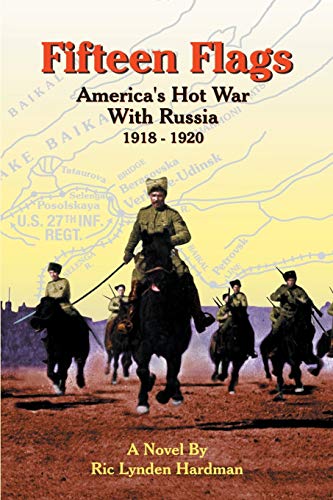 Fifteen Flags re-creates the American military intervention into Siberia during the Russian Civil war, one of America's earlier failed attempts to control the fate of nations. This epic novel focuses on company commander Captain "Hunkpapa" Jack Carlisle and his second in command, Lt. Ira Leverett, known to their men as the Sioux and the Jew. Their mission was to maintain neutrality on an isolated sector of the Trans-Siberian railway which was targeted by Bolshevik and Czarist troops, by roving bands of Cossacks and by the forces of a dozen other nations which sought to control Siberia. In 1920 when they received orders to withdraw Lt. Leverett deserted the company to find Maryenka Austin, widow of an American sergeant who died in action. Captain Carlisle and his men, riding two rail wagons behind an erratic wood burning switching engine, beat their way East toward Vladivostok trying to outrun an armored train commanded by a rogue White officer, Colonel Sipialef, who has stolen the Cazrist gold reserves. When Leverett locates Maryenka with a band of Partisans and learns she is pregnant, he convinces her and the Partisan leader that Maryenka should be evacuated with the American forces so that her child can be born in the United States.

After graduating from UCLA Film School, Ric Hardman worked as an associate producer on such successful films as The Bridges at Toko Ri, and The Country Girl. He wrote and sold several screenplays and two novels prior to Fifteen Flags, which was a Literary Guild main selection. His most recent book is Sunshine Rider, the first vegetarian Western.