Items related to Catholicism Unveiled: What Hides Behind the Public...

Mary Collins Catholicism Unveiled: What Hides Behind the Public Image?

Catholicism Unveiled: What Hides Behind the Public Image? 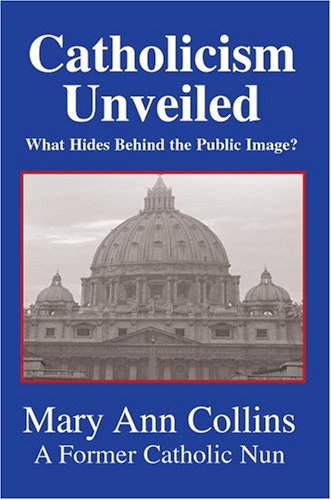 Official documents from the Second Vatican Council show that Rome's goal is to bring all Christians back into the Catholic Church. The Vatican wants to undo the Protestant Reformation.

Catholicism Unveiled reveals what is hiding behind Rome's modern, ecumenical image. It presents complex subjects in a clear, straightforward manner that is easy to understand. It confronts troubling issues with compassion and objectivity.

This book is thoroughly documented. In addition to source books, it gives references to Internet articles and pictures. You can check them out for yourself and draw your own conclusions.

Come explore the world of Catholicism, where grace can be "merited," and people atone for their sins by doing penances. We will travel through history and meet some fascinating people (both good and bad). And we will look at some official Catholic documents that show a surprising side of the Catholic Church.

Mary Ann Collins entered the convent because she wanted to be close to God. She gradually realized that some Catholic doctrines are contrary to Scripture. She left the convent and became a Protestant Christian, and she finally found the relationship with God that she had been seeking all along.