Items related to The Longest Hair in the World

Duncan, Lois The Longest Hair in the World

The Longest Hair in the World 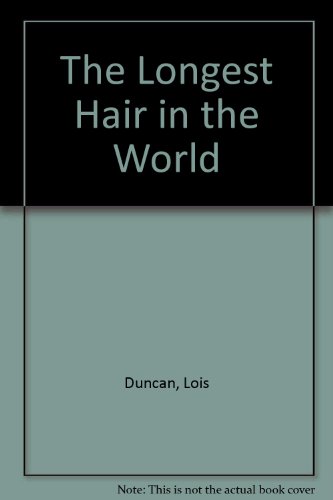 On her sixth birthday, Emily wishes for the longest hair in the world, and as it continues to grow and grow it creates terrible problems for her and everyone around her.

A little girl gets more than she bargained for when her wish to have the longest hair in the world comes true!

What could be more beautiful than heaps of heavenly hair? Emily can't think of a thing. When she blows out her birthday candles all she wishes for is hair, lengthy and long. But when things start getting too hairy, Emily's not sure how to make it stop. Is it possible to have too much of a good thing?

Lois Duncan grew up in Sarasota, Florida and from early childhood she knew she wanted to be a writer. She submitted her first story to a magazine at the age of 10 and made her first sale at 13. Throughout her high-school years, she wrote regularly for young people's publications, particularly Seventeen Magazine.
"My first book was a young adult novel because I wrote it at age 20, and teenage subject matter was all I knew about," Duncan says. "Today, although I write other types of books as well, I still choose to write primarily for teenagers because I love the sensitivity, vulnerability and responsiveness of that age reader."
Duncan is best known for her brilliant psychological suspense novels. She was drawn to this genre because those were the books he enjoyed reading. Of her writing technique, she once said, "Although I've been told that some authors start writing with only a general idea in mind and let their stories evolve on their own, I couldn't work that way. My books are tightly plotted and carefully constructed; every sentence is there for a reason. Personally, I can't imagine writing a book without knowing exactly how it's going to end. It would be like setting out on a cross-country trip without a road map."
Ironically, however, the story closest to Duncan's heart still doesn't have an ending. Who Killed My Daughter?, the heart-wrenching account of her search for the truth behind the murder of her 18-year-old-daughter, Kaitlyn, was written in real time as the horror story unfolded. When the Albuquerque, New Mexico, police department dubbed Kait's death a random shooting, ignoring evidence to the contrary, Duncan launched her own investigation. Her search for the answers took her into the underworld of Vietnamese gangs and led her to seek the help of the nation's top psychic detectives, who, along with a courageous newspaper reporter, provided information that proved to her that Kait's death was far from random. Written to motivate informants, the book was featured on such shows as Good Morning, America, Larry King Live and Unsolved Mysteries. "Tips have come in, but we still need concrete evidence," says Duncan. "I continue to believe that we will get it."
Her next writing project was, by necessity, of a totally different nature. "There was no way I could force myself to create a fictional mystery when our real-life mystery was consuming me," she says. "For sanity's sake, I decided that I had to switch channels." The result was The Circus Comes Home, a book for all ages about life behind the scenes at Ringling Brothers and Barnum & Bailey Circus. Duncan's home town was winter quarters for the circus in the 1940s, and her photographer father, Joseph Steinmetz, captured its magic on film. His remarkable photographs of elephants climbing onto the circus train, Emmett Kelly, the clown, in a bubble bath, and the Flying Wallendas teaching their four-year-old to walk the high wire provide stunning illustrations for Duncan's colorful essay about "a life that was fashioned of sawdust and star dust."

Duncan's most popular teenage novels have had to do with psychic phenomena, a subject that she admits she used to consider fantasy. "Today I believe differently," she says. "My experiences with psychic detectives during Kait's murder investigation have forced me to change my mind about what is and isn't possible. I feel a responsibility to let my readers know that ESP, as represented in books of mine such as A Gift of Magic and The Third Eye, is a reality." Other popular novels for teens by the author include Killing Mr. Griffen and I Know What You Did Last Summer, both of which were recently adapted for film.
Her nonfiction book, Psychic Connections: A Journey into the MysteriousWorld of Psi, written in collaboration with William Roll, Ph.D., project director for the Psychical Research Foundation, introduces teenagers to the fascinating world of parapsychology. Based on laboratory research and documented case histories, Psychic Connections addresses such subjects as astral projection, near-death experiences, apparitions and hauntings,poltergeists, clairvoyance, telepathy, and practical applications of ESP, such as the use of psychic detectives by law enforcement. Dr. Richard Broughton, Director of Research at the Institute for Parapsychology, calls this book " understanding.” scientific yield will ultimately mysterious but and scary seem may that nature human of aspect to introduction engaging an
Her fiction book Duncan's novel, Gallows Hill, was published in May 1997. When 17-year-old Sarah Zoltanne plays the role of a fortune-teller at a school fair, it seems like just a game. But as Sarah peers into a crystal ball, images appear with information she couldn't have known on her own. The other students grow frightened, calling her a witch. Soon Sarah starts to have vivid dreams about the Salem Witch Trials. Is it stress, coincidence, or reincarnation? The only thing Sarah knows for sure is that her life is in danger.
Author fun facts
Born: April 28 in Philadelphia, Pennsylvania
Education: University of New Mexico
Currently lives: North Carolina
Favorite . . .
. . . hobbies: photography
. . . foods: rare roast beef, spaghetti, avocados, tomatoes, shell fish, anything chocolate
. . . clothes to wear: shorts and bare feet in summer; jeans and sweat shirts in winter
. . . colors: yellow
. . . books: everything
Inspiration for writing: It's what I do. Like breathing.
If you would like to ask Lois Duncan a question of your own, send email to duncarq@interpath.com.