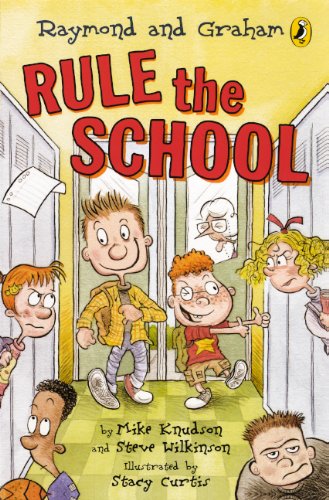 FOR USE IN SCHOOLS AND LIBRARIES ONLY. Best friends Raymond and Graham have waited their whole lives for fourth grade, when theyll rule the school at East Millcreek Elementary. But things dont go quite as planned when Raymond gets stuck with the most embarrassing line in the school play! Can he find a way out of it, or will he be humiliated in front of everyone?

Mike Knudson and Steve Wilkinson have been friends since elementary school. They live in North Salt Lake, Utah and Kansas City, Missouri respectively.

Stacy Curtis is a cartoonist and illustrator. He lives in Chicago, Illinois.

Grade 2–4—A rollicking, laugh-out-loud look at fourth grade through the eyes of two lifelong pals. The boys figure that this year, since they are the oldest kids at East Millcreek Elementary, they'll rule the school, but nothing seems to work out as planned. First, Raymond ends up having the creepiest teacher ever, then Graham accidentally shaves off his own eyebrow. After auditions for the school play, Raymond, who covets the role of Scrooge, gets a small part with a silly line about plum pudding. Faced with more ups and downs—and one hilarious situation after another—the boys begin to wonder if fourth grade will turn out to be a total disaster. Narrated by Raymond, this story is filled with nonstop action and kid-friendly humor. Done in an exaggerated cartoon style, Curtis's occasional black-and-white illustrations perfectly suit the tone of the text. Fans of Dav Pilkey's "Captain Underpants" series (Scholastic) or Jeff Kinney's Diary of a Wimpy Kid (Abrams, 2007) are in for big fun involving prunes, false teeth, misplaced first kisses, and two true-blue friends.—Andrea Tarr, Corona Public Library, CA
Copyright © Reed Business Information, a division of Reed Elsevier Inc. All rights reserved.