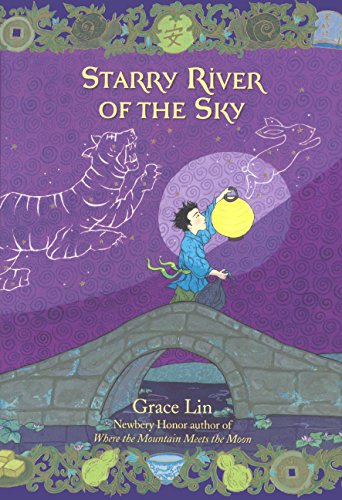 FOR USE IN SCHOOLS AND LIBRARIES ONLY. The moon is missing from the remote Village of Clear Sky, but only a young boy named Rendi seems to notice! Rendi has run away from home and is now working as a chore boy at the village inn. He can't help but notice the village's peculiar inhabitants and their problems-where has the innkeeper's son gone? Why are Master Chao and Widow Yan always arguing? What is the crying sound Rendi keeps hearing? And how can crazy, old Mr. Shan not know if his pet is a toad or a rabbit?But one day, a mysterious lady arrives at the Inn with the gift of storytelling, and slowly transforms the villagers and Rendi himself. As she tells more stories and the days pass in the Village of Clear Sky, Rendi begins to realize that perhaps it is his own story that holds the answers to all those questions. Newbery Honor author Grace Lin brings readers another enthralling fantasy featuring her marvelous full-color illustrations. Starry River Of The Sky is filled with Chinese folklore, fascinating characters, and exciting new adventures.

Grace Lin is the award-winning and bestselling author and illustrator of "Starry River of the Sky," "Where the Mountain Meets the Moon," The Year of the Dog, The Year of the Rat, "Dumpling Days," and Ling & Ting, as well as picture books such as "The Ugly Vegetables" and "Dim Sum for Everyone!" Grace is a graduate of the Rhode Island School of Design and lives in Massachusetts. Her website is www.gracelin.com.

* "This companion novel to Lin's Newbery Honor-winning Where the Mountain Meets the Moon surpasses that book in both plot and prose, again using interspersed stories that neatly circle around one another. The message that anger distorts while forgiveness transforms runs throughout the novel, never seeming repetitive and always feeling fresh while adroitly bolstering the connections among the various characters...[A]n enthrallingly told and handsomely illustrated tale."―The Horn Book, starred review

* "This mesmerizing companion to the Newbery Honor Book Where the Mountain Meets the Moon does not disappoint...Lin's writing is clear and lyrical, her plotting complex, and her illustrations magical, all of which make this a book to be savored."―Booklist, starred review

* "This tight and cyclical plotting, combined with Lin's vibrant, full-color paintings and chapter decorations, creates a work that is nothing short of enchanting. Like the restored moon, Starry River outshines the previous work."―School Library Journal, starred review

* "The writing and themes are lovely and readers feel the story long after it has ended...With the layers of myth, folklore, and superb storytelling, readers will be moved. Read this book; share this book; send Grace Lin a thank you card for sharing this story."―Library Media Connection, starred review

* "The lively mixture of adventure, mystery, and fantasy, supported by compelling character development and spellbinding language, will captivate a wide swath of readers."―Publishers Weekly, starred review

2. Starry River Of The Sky

3. Starry River of the Sky (Prebound)

Book Description Prebound. Condition: New. Prebound. Shipping may be from multiple locations in the US or from the UK, depending on stock availability. 288 pages. 0.340. Seller Inventory # 9780606322775

5. Starry River of the Sky

6. Starry River of the Sky

7. Starry River of the Sky (Prebound)

Book Description Prebound. Condition: New. Prebound. Shipping may be from our Sydney, NSW warehouse or from our UK or US warehouse, depending on stock availability. 288 pages. 0.340. Seller Inventory # 9780606322775