Items related to Staking A Claim: The Journal Of Wong Ming-Chung, A... 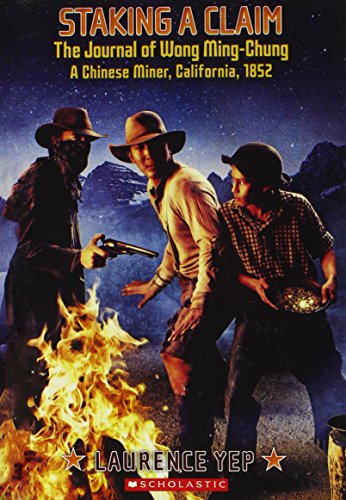 FOR USE IN SCHOOLS AND LIBRARIES ONLY. In 1852, during the height of the California Gold Rush, ten-year-old Wong makes the dangerous trip to America to live with his uncle, exchanging the famine and war of his native country for brutal bullies and grueling labor in America, Wong joins his uncle and countless others in the effort to strike it rich on the great ""Golden Mountain."" Unfortunately, he, and most of the rest of the dreamers, soon discover that there's no such thing as a Golden Mountain, only dirt, mud, and occasionally tiny flecks of gold dust--flecks that are to be turned over to the owners of the mines, in return for barely livable wages. However, someone as clever and resourceful as Wong will have to find other ingenious ways of making money if they're going to make it in America. But can they overcome the bitter, racist white Americans to find success?

Laurence Yep is the acclaimed author of more than sixty books for young people, including THE JOUNRAL OF WONG MING-CHUNG, A CHINESE MINER; the Newbery Honor Books DRAGONWINGS and DRAGON'S GATE from the Golden Mountain Chronicles; The Tiger's Apprentice trilogy; THE DRAGON AWAKES: THE SAN FRANSCISCO FIRE OF 1906; and THE DRAGON'S CHILD: A STORY OF ANGEL ISLAND, which he cowrote with his niece, Dr. Kathleen S. Yep.
Mr. Yep lives in Pacific Grove, California, with his wife.

Book Description Turtleback, 2013. Condition: Good. Bound for Schools & Libraries ed. Shows some signs of wear, and may have some markings on the inside. Seller Inventory # GRP111667049

Book Description Turtleback, 2013. Condition: Good. A+ Customer service! Satisfaction Guaranteed! Book is in Used-Good condition. Pages and cover are clean and intact. Used items may not include supplementary materials such as CDs or access codes. May show signs of minor shelf wear and contain limited notes and highlighting. Seller Inventory # 0606323430-2-4