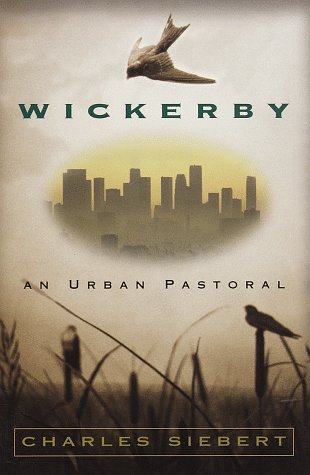 "Outside my window, the city lights are taking hold now, the breeze-brushed, gently pulsating grid. Why is a cemented aggregate of homes arranged in a tall, tight cluster any further from nature than one wood home within the woods? Because it is so thoroughly man-made? But we wouldn't call the towering carpenter ant's nest that I found one day in Wickerby's collapsing southeast corner 'ant-made.' We are no less natural than the next creature except that thinking makes it seem so. There is no such thing as nature. Wickerby would remind me of this. There is just the earth and us, the name-callers, standing upon it, calling those places without us, nature."


Against the backdrop of a tumbledown Brooklyn neighborhood, Charles Siebert, a native Brooklynite and longtime city-dweller, reflects upon the five months he has just spent at Wickerby, an old, collapsing log cabin in the woods of Canada. In vivid, lyrical prose, Siebert relates the events that prompted his sudden departure to Wickerby, and, while recounting the details of his isolated existence there, arrives at a series of stunningly original insights that explore and often explode the classic Romantic distinctions between city and country, man-made and natural. Along the way, the book's episodic, wide-ranging narrative takes us from Brooklyn's rooftops, where "pigeon mumblers" chase their flocks into the sky, to Albert, Wickerby's reclusive caretaker who pilfers the cabin's artifacts for his own yard sales.

In what emerges as a refreshing subversion of the typical log cabin book, this beautifully composed account of a journey away from the city ultimately allows us to view the city anew: not as the traditional antagonist of the natural world, but as a logical and inevitable outgrowth of that world, an entity as wondrous and awe-inspiring as anything found in nature.

"A work of great humor, deep humanity, and breathtaking sentences, Wickerby manages--very genially--to turn Walden completely inside out and upside down. Shuttling between the wilds of Brooklyn and Canada, Charles Siebert upends all our preconceptions about 'nature' and 'civilization,' two words that look completely different by the end of this gem of a book. Siebert brings a wonderful new voice to American nature writing."
--Michael Polla

"This is a visionary book that means to change the way we see ourselves in the world, the way we think about nature and modernity. Wickerby--the story of one love-lorn and city-exasperated man's flight to his wayward girlfriend's abandoned country cabin and the radiant epiphany of his return--reads like a combination of Nabokov and Whitman: rapturously well-written, often hilarious, filled with astonishing anecdote and detail."
--Francisco Goldman

"Charles Siebert writes like an angel, and full of pith--coalescing incandescent insights about woods-nature or city-nature and how they often interlock, with the funny, unassuming sort of common sense that acts as glue for this endearing book."
--Edward Hoagland

"Mr. Siebert makes writing athletic: serious and sporty, grave and quick. The miracle of Wickerby is not that his log cabin proves tenable but that his nuked quarter of Brooklyn looks delicious, is much the preferable garden."
--Padgett Powell

Charles Siebert's essays, articles, and poems have appeared in The New York Times Magazine, The New Yorker, Harper's Magazine, Esquire, and Outside. He lives in Brooklyn, New York.