Items related to All Meat Looks Like South America: The World of Bruce...

McCall, Bruce All Meat Looks Like South America: The World of Bruce McCall

All Meat Looks Like South America: The World of Bruce McCall 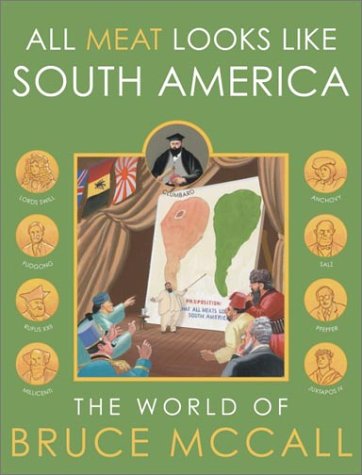 A retrospective celebration of the long career of one of America's leading illustrators and humorists.

Child of the Zeitgeist

Bicker one can about his inability to draw a convincing dog, his overdependence on "funny" names, his effrontery in presuming to place another dump-truck-load of hackwork between covers; that the creator of the following body of work could get anything done at all during the period represented herein is perhaps the real triumph to be celebrated in this book. The events of the tumultuous period between 1935 and 2002 "could fill 67 fat almanacs and an encyclopedia," observed Will Durant, or William Crapo Durant, at any rate one of the Durants, maybe Ariel for all we now know. But consider: the Glassboro Summit, Princess Margaret's wedding, Newfoundland's entry into Confederation, Corfam, Judy Garland's comeback, the Studebaker-Packard merger, Expo 67, the 1968 San Antonio World's Fair, ad infinitum-each of us has his or her own such list, albeit probably not as lengthy nor as comprehensive as his, for he was further distracted by events-the Belgian waffle riots of the immediate postwar period, the launch of the first naphtha-powered submarine-that never actually happened. As if these were not distraction enough for any artist or school of artists, there was all the while the shoe-store job. There were the family feuds, the bouts of catatonia, the long walks. He even did his own washing and ironing, save of course for the Utrecht years. And yet, and yet, the work kept coming and keeps coming still. Rushed, fragmented, as often wobbly of aim as it is woozy of execution, to be sure, as if he were painting with the one hand while pasting another clipping into his Dionne Quintuplets scrapbook with the other. And withal, seemingly not a trace of profundity from first page to last, only the relentless har-har-har of the born vulgarian. We would submit that less could hardly be said of any other book of its time.

Statues of the Four Unknown Bowlers, each on the verge of ecstatic release; a vast domed interior; a single towering entrance; a steep bank of steps serving to expose and separate out the weak and infirm: this citadel of pure athleticism is Speer at his most visionary-and least practical. "All's we wanted was a roofing job and a new sign," huffed vexed Bowl-O-Rama proprietor Mel, "and this nut in a trench coat comes up with a Taj Mahal!" Speer later tried selling the same plans-Unknown Bowlers converted to Unknown Carpet Layers-to the House of Shag down the way, but again without success.

The Lost Sketchbooks of Albert Speer After Hitler's official architect, Albert Speer, left Spandau prison in 1966, he had big plans to rebuild his career on the other side of the Atlantic.

Sprung from Spandau prison in 1966 after 20 years with little more to his name than a 50-deutsche-mark bill and a new ankle-length leather raincoat, Albert Speer wasted no time calling in his chits among old rocketeer chums now working for nasa. If they'd help him find architectural work in the United States, he'd burn certain sensitive wartime documents. That the official architect of the Third Reich should be scrabbling to bid on this fast-food outlet or that souvenir stand in the American hinterlands may seem a colossal comedown; Speer saw it as the start of his comeback. Forbidden to practice in a Europe that refused to let bygones be bygones, he meant to glorify even the humblest of projects with his bold and monumental vision. Soon enough, he believed, as evidence of his genius spread, America too would fall for the unique architectural style that had dominated pre-war Germany.

This was not to be. Speer's compulsive reliance on the brutish mass, the soaring column, and the mile-wide avenue may have thrilled his megalomaniacal patron Adolf Hitler; applied to a Tulsa shoe store or a Bakersfield Moose lodge, these motifs clashed with the democratic vernacular and were, in some cases, counterproductive from a mercantile point of view. Again and again, his ambitious solutions were submitted, rejected, and forgotten. Trapped in the one idiom he ever knew, Speer could only be Speer. Careerwise, it was three Reichs and you're out.

Albert Speer died in 1981 without seeing a single one of his post-Spandau visions realized in windowless stone and concrete. His American sketchbooks vanished into limbo with him-until early this year, when, in a thrift shop in Munich, a sheaf of papers was found sewn into the lining of a long leather raincoat. It was Speer's long leather raincoat, of course, and those papers were Speer's lost sketches, secreted away for fear of sullying his legend with evidence of utter failure.

Here, then, the lost sketchbooks of Albert Speer: haunting images, unseen for decades, marking the final bizarre chapter of the 20th century's most controversial architectural career.

Soaring verticals had marked many a previous Speer concept, most notably his "cathedral of ice" for the annual Nuremberg party rally in the 30s. Transplanted to the Arizona desert in the form of three identical aluminum towers, the idea might well have worked to lure tourists from miles around to the roadside stand below, evoking the awe that buckles resistance. Proprietors Ma and Pa Jeeter had been thinking more along the lines of a repaint and a new screen door; accustomed to limitless government funds, Speer took things rather further. His bid, $15.9 million over budget, was regretfully declined.

As with so many Speer buildings, this automated car wash seems to pin the onlooker to the ground and render mere humans-and their cars-insignificant, while virtually demanding patronage, now. Yet there are brilliant flashes: wash suds recycled to create an imposing illuminated waterfall, both a functional cue and-with its roar magnified via loudspeakers-a symbol of raw power; a multitrack pass-through handling 2,000 autos per hour; twin "eternal flames," a favorite Speer theme here used to signal an open-24-hours policy. Pompous overstatement for a mere car wash? Perhaps. The architect himself met such quibbles with icy disdain: "Next to Speer," he thundered, "even Ozymandias looks shy."

Stark and almost grimly functional, Floyd's cast-concrete Kozy Kabins allowed-indeed, ordered-guests to drive their cars directly into their cabins. But what to make of the twin guardhouses at the south entrance, superfluous if not outright overkill in most motor-court designs? Floyd took this, as well as the cabins' total lack of fenestration and a paved landscaping plan relieved only by artificial palm trees, as a hint that Speer might lack a certain feel for the tastes of the American traveler. The rejection of his proposal broke Speer's heart. Vowing to never again waste his genius on the philistine American, he had just begun sketches for a new police academy in Paraguay at the time of his death in 1981.

gone but not forgotten

Not to be confused with the Artists & Models Escadrille, also born of patriotic desperation in the glorious hopelessness of May 1940. The Dadist Free Squadron flew its own Canard-et-Chicane 607-B, bought from L'Armée de l'Air via a crooked cabinet minister for 100 francs. The all-volunteer Dadists' "nonsense tactics" of bombing French troops, carrying no bombs, or simply staying parked on the tarmac for days befuddled Nazi attackers and French defenders alike. But the true confusion was on board. Indeed, it was on May 9th over Arras, when a splinter faction of Futurists joined with the Cubists and forced a vote on whether to keep flying or land, that the Free Squadron's valient career ended. The vote produced a deadlock, and after circling a landing field for hours, the Canard-et-Chicane ran out of fuel and crashed. It lives on today at a frites stand near a go-kart oval just outside Loos.

Only one prototype of this 14-engine turboprop behemoth (note accompanying B-17, dwarfed by comparison) was ever built. The Stratoflattener superbomber never achieved its intended status; Senate hearings confirmed that the required crew contingent was too large to leave space for bombs and that training noise-deafened crew memebers to lip-read would drain the Air Force's budget. Mothballed in Arizona in 1954, the lone Stratoflattener gained a dubious new fame when it was started up at an Air Force Day celeberation and triggered the Great Arizona Quake of 1959.

Secretly produced in a Prague tailoring plant during the Nazi occupation and powered by a single 56-cylinder engine made of 28 sewing machines, the Hrabny-Chud was slow and clumsy but "nert hobny de zignat abagnad!" (smooth as a sewing machine), according to those who flew her. Its unique modus operandi was: fly over retreating Nazi columns, stall, and make pancake landings on their hapless heads.

No substantiation exists for the legend that Adolf Hitler himself designed the BV-901, nicknamed Hummer (Lobster). "He wasn't that batty," debunks one ex-Luftwaffe officer. It was in fact designed by the freshman class at the Hermann Göring Trade School for Boys at Karlsruhe in the waning days of the war. Power came from seven different engines, on the theory that if even one or two broke down or exploded, enough thrust would be left to keep the Hummer aloft. Turning the school's bus, furnace, refrigerator, and emergency generator into engines of one ingenious type or another, the lads did their best, but the Hummer's trajectory was naturally straight down, so the Luftwaffe recommended using it as a bomb. The Frau Goebbels Girls' Home Economics School was racin...

1. All Meat Looks Like South America: The World of Bruce McCall

2. All Meat Looks Like South America: The World of Bruce McCall

5. All Meat Looks Like South America: The World of Bruce McCall

6. All Meat Looks Like South America: The World of Bruce McCall

7. All Meat Looks Like South America: The World of Bruce McCall

8. All Meat Looks Like South America: The World of Bruce McCall