Items related to NBA at 50 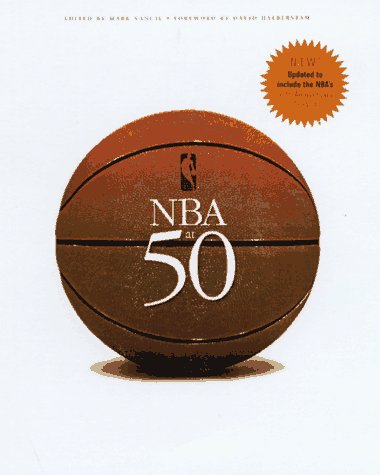 Photographs of winning moments in NBA history and portraits of its stars are accompanied by descriptions of game highlights, profiles of players and coaches, and quotations

No sport markets itself with anywhere near the razzle-dazzle that pro basketball does, and no book has ever caught the high-energy spirit of the league quite like this anniversary volume. The action photography is stirring, but it's the graphically thrilling homage it pays to the 50 players selected as the greatest of the National Basketball Association's first half century that truly raises The NBA at 50 to a level well above the rim.

Coffee-table book, commemorative volume, p.r. piece--none of these terms suggests quality or substance, but occasionally something of lasting value can come in a glitzy package. Take The NBA at 50an example of lavishly produced corporate hype if there ever was one. And yet, this oversize photo album is much more than a print version of one of those "I love this game" television commercials. Instead, editor Vancil's mix of stunning, jump-off-the-page color photos and revealing captions in the form of reflections by NBA players and coaches, past and present, combine to produce a marvelous visual history of professional basketball. David Halberstam offers a perceptive foreword in which he pinpoints pro basketball as the sport that lends itself best to the frenetic modern era, but appropriately, it is the pictures, not Halberstam's rather sedate words, that best make the case. Whether it is Russell and Chamberlain battling under the boards, Michael being Michael in a host of signature shots, or Shaq offering his Incredible Hulk imitation, the NBA begs to be seen. Even with the limits of still photography, the overwhelming physicality of the game translates wonderfully to the four-color page. Expect the book to receive lavish promotion when the NBA, as part of its fiftieth birthday on October 29, announces the 50 greatest players of all time, as selected by a panel of former players, coaches, and journalists. (That list will be included in the finished book but is being embargoed until the formal announcement is made.) Buy the book now to meet the demand but recognize that its appeal will far outlast the hoopla. Bill Ott