Items related to Passport to the Cosmos: Human Transformation and Alien...

Passport to the Cosmos: Human Transformation and Alien Encounters 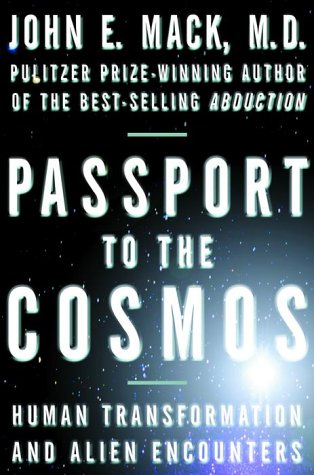 In his groundbreaking follow-up to the bestselling Abduction, Pulitzer Prize-winner John E. Mack powerfully demonstrates how the alien abduction phenomenon calls for a revolutionary new way of examining the nature of reality and our place in the cosmos.

Harvard professor Mack stunned the world when he published the astonishing results of his extensive research involving clients who claimed they had had encounters with alien life-forms. Writing with the authority and insight that have marked his distinguished career as a psychiatrist and writer, Mack used the remarkable stories to show how the abduction phenomenon has the vast potential to transform the foundation of human thought. In Passport to the Cosmos, Mack, who has done additional research with abductees in the United States and around the world, provocatively asserts that this phenomenon is part of a new age in human consciousness, a time in which we must be willing to embrace the idea that alien visitation is real on some level. Drawing on the rich tradition of non-Western and indigenous cultures, which are more accepting of the idea that we live in a multidimensional universe, Mack persuasively shows that by broadening our definition of "what is real" we can begin to explore a phenomenon that has deep and lasting implications for humanity.

In Passport to the Cosmos, John Mack further solidifies his reputation as a brave pioneer on the forefront of the science of human experience with an authoritative voice that takes us into the twenty-first century.

Despite official skepticism and cynicism, it must be evident to many people that something extraordinary-at least from the standpoint of the Western worldview-is going on.

Yet the debate that is devoted to reports of alien abduction remains focused largely on the question of whether or not it is real in the strictly physical sense. Some skeptics even claim or imply that, insofar as the physical evidence for the reality of the phenomenon does not meet standards of scientific proof, we can presume for practical purposes that it does not exist at all.

But what if the phenomenon were subtle in the sense that it may manifest in the physical world, but derive from a source which by its very nature could not provide the kind of hard evidence that would satisfy skeptics for whom reality is limited to the material? If so, might we not be losing an opportunity to learn and grow as a species by remaining so wedded to an epistemology of physical proof?

What if, instead, we were to acknowledge that the abduction phenomenon is intrinsically mysterious and, ultimately, beyond our present framework of knowledge? What if we were to admit our puzzlement before this mystery?

Might not such an attitude of humility become, paradoxically, a way to enlarge upon what could then be learned? Is it possible that adopting an open attitude could result in greater knowledge not only about the physical aspects of the phenomenon, but about numinous dimensions as well?

And might not this opening of consciousness enable us to learn of unseen realities now obscured by our too limited epistemology, allowing us to rediscover the sacred and the divinity in nature and in ourselves?

"Such a profound and beautiful existence is this world we live in, and how much more wondrous to truly know that not only are we not alone, we're really not alone."
-- Karin, an experiencer, to John Mack

1. Passport to the Cosmos: Human Transformation and Alien Encounters

2. Passport to the Cosmos: Human Transformation and Alien Encounters