Items related to Voices of Rape 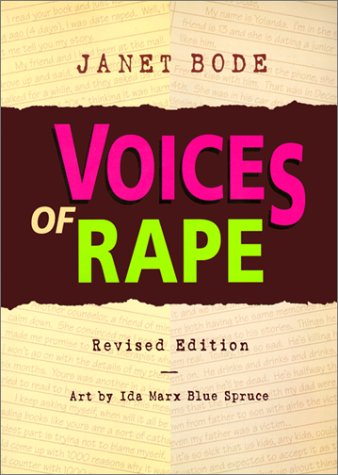 Uses first-person accounts of both rape victims and offenders to depict the physical, psychological, and legal aspects of rape and gives advice on what can be done in various situations.

Grade 9 Up-"Half a lifetime ago, I was forced at knifepoint to a garbage dump and gang-raped," Bode begins this revision of her 1990 title and maintains much of the same level of intensity throughout. New interviews have been added, as has illustrative material. Reading these first-person accounts by rape victims, counselors, health-care providers, law-enforcement officials, and offenders is a deeply disturbing experience. As in the previous edition, the author offers her interviewees' statements with little editorial comment. The ability of teenagers to handle this kind of information without any interpretation or authorial intervention is likely to be a cause of concern in many quarters. Certainly there are parts of the book that could be extremely offensive to some readers, e.g., a rapist recounts his childhood and crimes in comic-strip format, and a young man insists that his participation in the rape of a classmate was just "standard teenage stuff." While valuable information is provided in addition to the interviews (sections on crisis centers and emergency-room procedures are particularly noteworthy), it is the words of the people directly involved that carry the greatest power. The first edition of this book was provocative; the second will be even more so. Even collections that have the old edition may want this one.
Richard Luzer, Fair Haven Union High School, VT
Copyright 1999 Reed Business Information, Inc.

There are some notable changes in this update of an important 1990 book that took a wide-angle look at the crime of rape by using the first-person testimonies of a rapist, a survivor, a law-enforcement officer, and others. The format here is more spacious, thanks to extra leading and the judicious use of boldface subheads and boxed insets (usually excerpts from newspaper articles). A list of help-line resources has been incorporated into one of the chapters, and Bode uses an endnote to update the life of each of the speakers. A sampling of letters Bode has received from readers over the years, along with her earnest replies, is also included. Two black-and-white cartoon segments, by Ida Marx Blue Spruce, appear as well: one, a retelling of the prison interview Bode conducted with a convicted rapist; the second, a new story used to illustrate the double standard regarding male rape. Although they are technically good and serve to break up the text nicely, they aren't entirely successful: the shocking dispassion of the rapist's testimony, for example, felt in full in the previous edition, is lost in the stripped-down cartoon version. On other fronts, however, this is a thoughtful reworking that maintains the integrity of a fine book. Stephanie Zvirin