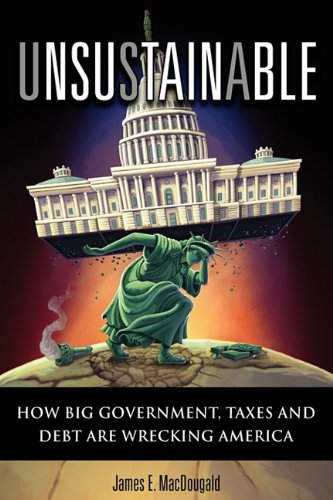 UNSUSTAINABLE is packed with information that is vital to every taxpaying American. It reveals shocking information that has long been hidden from the public. It exposes how governments at every level hide the pay and exorbitant pensions they provide to themselves and use accounting trickery to keep taxpayers from knowing of the enormous costs and long-term liabilities. MacDougald shows how the federal government keeps $106 trillion of debt hidden from taxpayers, and how state and local governments hide another $3 trillion. He exposes exactly how governments often trick taxpayers into agreeing to pay more and more taxes to "save schools" or "provide police protection" when the money really goes to more pay and bigger pensions. UNSUSTAINABLE details how public sector unions have become a "money pump," taking taxpayer dollars paid to public sector workers, then given as union dues, and then used for political contributions to politicians who will support the extraction of even more taxpayer dollars. The provocative and controversial book also documents and exposes the huge financial catastrophe that is about to befall Social Security, "baby boomers" and our younger workers and how it will threaten our economy for decades. UNSUSTAINABLE addresses the "jobs squeeze," detailing how the private sector lost 1.5 million jobs in the last decade even as government grew by 2 million. And it reveals how Congress passes laws that they know violate our Constitutional rights and gets away with it. It is a book that all Americans, no matter what their politics, must read.

"... will be a difference maker in the recovery of our nation." --Chris Sullivan, Founder, Outback Steakhouse

"His book will inspire you to become an advocate of our free enterprise system." - Bob Martinez, Former Governor, Florida

"...has taken on the task to "get out the word and sound the alarm" on this critical issue for all Americans...and our children and grandchildren." --Richard C. Elias, Chief Executive Officer, Transitions Optical, Inc.

"... well researched, relevant to today's current events, timely, and the basis of a story that must be told." --Ron K. Bailey, Former President, Strayer University