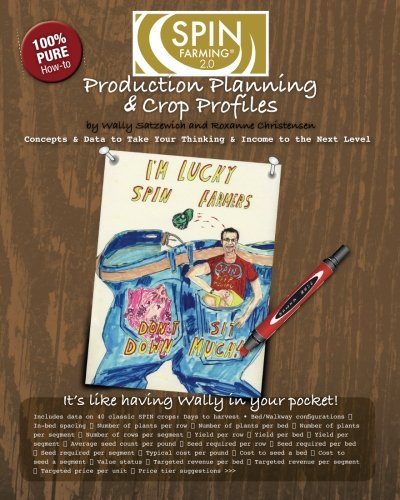 SPIN-Farming 2.0: Production Planning & Crop Profiles contains advanced sub-acre growing concepts coupled with yield, pricing and revenue benchmarks. It also provides data on 40 classic SPIN crops, including bed/walkway configurations; in-bed spacing; number of plants per row, per bed and per segment; yield per row, bed and segment; average seed count per pound; seed required per row, bed and segment; cost to seed a bed and segment; crop value status; price tier suggestions and targeted revenue per bed and segment. Building on the non-technical, easy-to-understand and inexpensive to implement farming system outlined in SPIN-Farming Basics, SPIN-Farming 2.0 provides the detailed data and analysis that are relevant and useful to the new generation of farmer whose success depends on producing good food at a reasonable profit. Using street value farming, it describes how sub-acre farmers can plan commercial scale operations that put significant incomes in their pockets while meeting the growing demand for locally produced food. SPIN stands for "s-mall p-lot in-tensive", and it is a system that integrates intensive production with a direct marketing business model. It is now being practiced by a growing corps of first generation farmers that spans geography, generations and class.