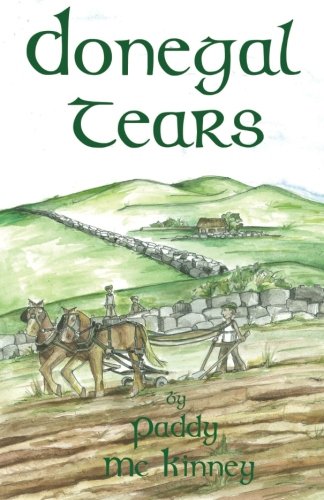 Donegal Tears Ireland called it "The Emergency" whilst the rest of the world named it World War Two. Although neutral during The Emergency, Ireland was still faced with many shortages, both during and in the years following the war. But there was no shortage of autocracy and brutality for your Irish farm boys and girls in rural Donegal and elsewhere in the schools of Ireland. This is the story of Peter McGinn, an Irish lad growing up on a forty-five acre farm-large by Donegal standards. Like Angela's Ashes, Donegal Tears shows real life in the countryside of County Donegal in the years following World War Two, outside the tourists' haunts and stereotypical images of Ireland. Genuine images of the real Ireland are carefully drawn with honest characters who rise off the page and tip their caps at the reader, inviting them along towards the smell of a turf fire and the scent of new-mown hay. So, light the lamp, fill your cup and journey to the authentic Ireland with Donegal Tears. Paddy Mc Kinney Paddy lived through the times he writes about in Donegal Tears and tells the reader of his clear vision of the life and times of post-war Ireland in general and Donegal in particular. A native Irish speaker, Paddy calls up the ghosts of long ago-the school masters and mistresses, the parish priests, farmers and farm wives to tell an engaging story of real life, real people and genuine Donegal tears, shed by many. This is Paddy's first book. He lives with his wife in Co Donegal, Ireland.