Items related to TV in ADHD: The Reel Story of ADHDtv

TV in ADHD: The Reel Story of ADHDtv 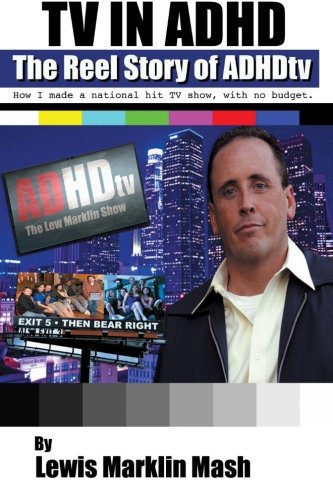 Nationally recognized television producer, Lew Marklin, tells the story behind ADHDtv, for the first time. Marklin expounds on drugs, alcohol, dating cast members on set, and the very unconventional way in which the show came together, changed directions and went from being a local access cable show, to national syndication and regional Emmy Nominee in 2009. From Book Cover: From 2007 to 2009 ADHDtv swept the nation by storm, syndicating a unique brand of of news and comedy in over 52 major US cities. The show, produced by its star host Lew Marklin, achieved success with little budget while remaining on air for three seasons. Theshow eventually received a large cult following and drew the attention of Hollywood celebrities, who came out to garner support for this underground classic. IMDb ranked ADHDtv higher than any private cable show in history, outranking several big budget network TV shows in 2009. In this first book by Mash, the producer uncovers some of the stories behind the show. He reveals his production strategies, such as green screening, post production, casting, dealing with the public and syndication. Mash also shares a more personal side of his life, which included substance abuse, living daily with ADHD and dropping out of high school. If you have ever dreamed of creating your own national TV show, or you just want to have fun making your own TV show or film, then draw from the inspiration that Mash shares in his debut book. Accolades: "Lewis Marklin is amazing. He always shines the light at what most people miss. This (book) is brilliant. He tells the truth when others are scared to speak up about the most important issues of our times." Skyler Jett, Grammy Award Winning Music Artist, Activist and Radio Personality.

Lewis Marklin Mash is a Television Producer, TV show host and rap artist. Mash began rapping at the age of ten years old, in his hometown of Cerritos California, in 1984. Once, considered by many, to be the top rap prospect in the country, Mash appeared on several national TV shows, but lost his father at the age of seventeen. The teen decided to enter the ministry where he spent the next five years as an evangelist. In 1997, Mash headed home to Los Angeles and found his way back to the entertainment business. In 2000 Mash moved to Santa Barbara, to go back to school for Broadcast Journalism and Television Production, where he would work for ABC News, the Los Angeles Dodgers and several other world renowned companies on his way to producing ADHDtv. Mash gave up everything, to pursue his dream of producing and hosting his own national TV show. Mash was a notoriously troubled youth, growing up to face the challenges of a cold harsh world, but offering his readers the hope and courage to overcome life’s obstacles and make the best of your circumstances. Mash was an alcoholic and drug addict, with learning disabilities and a 9th grade education. However, he refused to let circumstances overcome him. Now, “Lew Marklin” is a well-regarded name in Hollywood, with a cult following that stretches the globe and is becoming a recognized figure for his work with many charity organizations. Mash has worked with some of the biggest names in Hollywood, produced over 225 national TV show episodes and talks about some of those experiences in his first book, “TV in ADHD: The Reel Story of ADHDtv.”