Items related to Light in a Dark Place: The Prison Years

Light in a Dark Place: The Prison Years 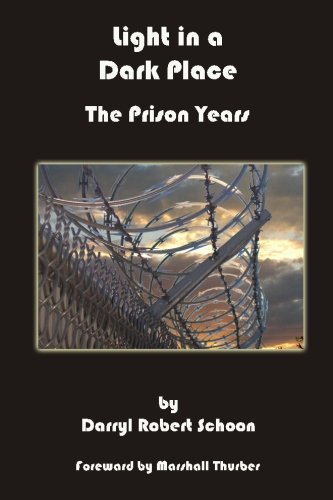 Light in a Dark Place is a collection of prison writings and enlightened observations by Darryl Robert Schoon. Maxine Hong Kingston and Marshall Thurber, among others have encouraged the publication of his writing. Consisting of material composed during a 10-year prison sentence with additional reflections after release, it affirms our relationship to life and God while questioning justice and democracy in America today. A mosaic of essays, stories, and poetry, it gives a picture of one man's journey to find light in a truly dark place. Light in Dark Place also includes the story of Howard Hughes' former banker, a story that details the apparent embezzlement by members of the Reagan White House of millions of dollars of Saudi money intended for the Afghan freedom fighters. The 3rd edition contains information explaining the reasons for the attacks of 9/11.

This book truly sheds light on some very dark areas in our culture. Mainly written between 1986 and 1992, it is eirily prescient of the crisis that now threatens America’s freedoms. This book should be of interest to anyone who is concerned about the necessity for change in our country.

Darryl Robert Schoon came of age in the 1960s in California. A graduate of UC Davis in Asian Studies, he started law school and then dropped out into the San Francisco counterculture. He is best known for his writing and speaking in areas of economics and gold. His books have sold in 25 countries and he has given talks all over the world. He is also an owner of a condom company, Mr. Happy's Hat, Inc. and an ordained minister at The Temple of Universality.

1. Light in a Dark Place: The Prison Years